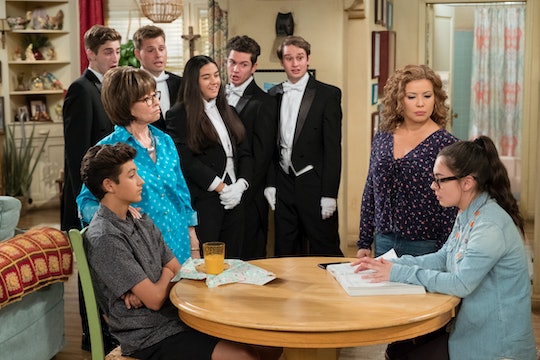 Fans all over the world, not least of all myself, were utterly devastated when it was announced that Netflix's inclusive reboot of the classic sitcom, One Day a Time, was being canceled. It's not unheard of for a canceled show to be rescued by another network at the 11th hour thanks to fan outrage, so obviously now fans want to know if One Day At A Time will be saved. There's a chance that this show hasn't seen the end (fingers crossed).

Rumors that the show would be saved started almost as soon as the cancellation news broke. But it wasn't until Apr. 2 that Vulture reported that the smaller streaming network CBS All Access officially made a bid to save the show. But Netflix has the option to block any show's move to another streaming network for at least two years after it's originally been cancelled.

So, a "Yes" from Netflix is what fans need. Vulture also reported that executive producer original series developer, Norman Lear, contacted Netflix chief content officer Ted Sarandos personally to ask for help saving the show. But even though they cancelled the show, the streaming giant is playing coy. Fans like Hamilton writer Lin Manuel Miranda don't have time for games:

Another fan on Twitter had a reply to Miranda that needs no introduction, so I'll just leave it here:

One Day At A Time co-creator Gloria Calderón Kellett has been publicly fighting for the show since before it was officially cancelled and cited the pilot season as one of the reasons Season 4 of the series might be facing more road blocks. She said to Variety, “Everyone’s like, ‘Ooh let us see what’s happening,’ because pilots are shiny and new, so everyone’s sort of waiting to see how the pilots are turning out.”

But the "business" of it all doesn't matter to fans. Some think that networks have a moral obligation to save shows that increase representation for marginalized communities.

Other fans are even ready to cancel their Netflix account if something doesn't change.

As much impact as the show has had on its fandom, it seems like Netflix could go either way at this point. But Calderón Kellett will keep fighting for the show for as long as she can. “We are hopeful that maybe there can be special dispensations made so that that’s not the case, especially given Netflix’s tweet about supporting this community and loving the show,” Vulture reported her saying at a Mar. 28 industry event. "You know, if you love us, set us free, I say.”

Unfortunately, it's just a waiting game until Netflix makes a decision. But Calderón Kellett is continuously letting fans know their love is seen and appreciated. "No new news. But I know you are out there loving us. Supporting us. And that is why we do what we do with such love. For you. So, thank you. More soon. #SaveODAAT," she tweeted.

For now, just cross your fingers that Netflix frees Lydia, because we all deserve a feisty abuelita in our lives.