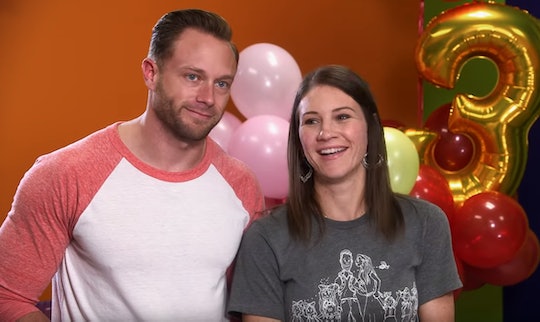 Here's What You Should Know About Season 4 Of TLC's 'OutDaughtered'

Fans can’t get enough of TLC’s reality series OutDaughtered. Parents Adam and Danielle Busby, their daughter Blayke, and their quints — Parker, Riley, Hazel, Ava, and Olivia — have won the hearts of viewers with their fun and sometimes tantrum-filled family dynamic. The Season 4 finale aired in October, so fans are wondering, will OutDaughtered return for Season 4?

In an email to Romper, TLC confirmed that OutDaughtered has been renewed for a fourth season, but there is no official date on when it will premiere. Noting that the series has just been renewed, and it will take time to film and edit an entire season, I’m guessing fans will have to wait until next year for the new season. The last two seasons premiered in the summer, and if TLC stays true to its past scheduling of OutDaughtered, Season 4 should air sometime in July of 2019.

The series has been following the Busby family from Danielle’s pregnancy to the birth of their quints — the only set of all-female quintuplets in the United States. Fans have been watching the family grow and adjust to their new life with the quints, so it’s understandable that they want to see more. On the last season of OutDaughtered, the quints celebrated their third birthday and hit some pretty meaningful milestones like potty training and taking their first long trip to Hawaii.

As of now, there’s no way to tell what to expect next season, but I’m sure it will be more adorable antics from this tiny fab five. On their Instagram page, Adam and Danielle posted an update revealing that they were in the process of moving, so you may see the family in a new home next season. Earlier this month, Adam posted a video to his Instagram story in which he said that the family was forced to make some “major changes” to their living situation.

“So we have to give a big update about what’s going on with our house, because we have some major changes, especially this house that we’re in now,” he said in the video according to InTouch Weekly. “We’ve been extremely busy relocating. We had some major issues with our other house that caused us to have to leave.” While the couple hasn’t disclosed a reason for the move on social media yet, a few weeks ago they posted an Instagram picture of the kids sleeping in living room with the caption “Well... this is what happens when you have second story AC problems.” I guess fans will have to wait until the next season to find out the reason behind their big move.

Waiting for a new season of OutDaughtered might feel like forever, but you’ll get a chance to catch the Busby family in action pretty soon. In October, Adam posted an update on his IG page hinting that the family was working on a project with Food Network. It was recently announced that the Busby family will be featured on the premiere of Food Network’s new series, Winner Cakes All.

The show is hosted by Giada De Laurentiis and will follow four baking teams as they compete to make a birthday cake for the Busby quints. “America's favorite quintuplets need an epic cake with puppies, unicorns and rainbows to serve at their 4th birthday party,” reads the official Food Network synopsis. “But with more than 150 guests coming, the bakers are challenged to make a gigantic cake that pleases every member of the family.”

Knowing that Season 4 is on its way should give fans comfort, but until then, they can catch the OutDaughtered family on Winner Cakes All which premieres on Monday. Jan. 7 at 10 p.m ET on the Food Network.

Editor's Note: This headline has been updated to reflect the correct new season, 4.