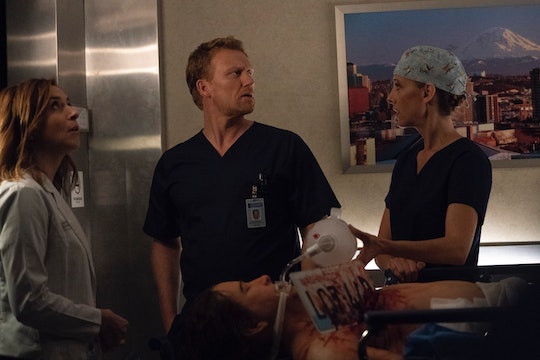 Grey’s Anatomy may be a medical drama, but probably half of that tension comes from romance. Yes, most series these days have a lot of sex, but Grey’s has set a precedent unlike any other. And while almost all of the relationships are up in the air or have been at some point or another, few have gone through the trials and tribulations of this main pairing. So if you’re wondering if Owen and Amelia break up on Grey’s Anatomy this season, I obviously don’t have a definitive answer for you — but I have a lot of opinions.

When we last saw them, the on-again couple were trapped in an elevator with Owen’s baby mama and long-time unrequited love interest, Teddy Altman. The two had a brief fling after Amelia and Owen’s divorce, resulting in her pregnancy. Teddy just spilled the beans to Owen after what felt like an eternity to me, but was probably only a couple of weeks? Still, now the truth is out in the open, and it could break the very fragile relationship that is Omelia.

Here's my prediction: Owen and Amelia are going to grapple in the elevator. Amelia will probably get angry, and turn things back to Teddy, trying to understand why she waited so long to tell them (aka, just when things were getting good again for her and Owen).

Personally, I think that when it comes down to it, Owen is going to be with Teddy. But I don’t think it’s going to happen right away. I think he and Amelia will try to work things out since they really seem to have a good thing going right now. But ultimately, I believe Amelia will focus on her relationship with Betty, which could then be fractured if Betty gets better and decides she doesn't need her — or worse, she decides she wants to leave with Leo.

So how did they get here? Let’s take a look back at where it all began. Amelia Shepherd, little sister of leading man Derek Shepherd (R.I.P.), is a neurosurgeon just like her big bro. She showed up once or twice in Seattle, but primarily lived in Los Angeles, starring on the criminally under-appreciated spinoff Private Practice. In Season 10 of Grey's, Amelia arrives suddenly and just never leaves, taking over Derek’s job when he goes to D.C. and, following Cristina’s departure, striking up a romance with Owen Hunt.

The early days of their romance were pretty sweet. Owen learned about her history with addiction, and shared his own struggles with PTSD.

Things got rough for the couple when Derek died at the end of Grey’s Anatomy Season 11. Amelia relapsed, got sober again, and then they got married like, really soon after. Then they got divorced because Amelia realized she didn’t want kids. And then, of course, there was the discovery of her brain tumor, and then they got back together — and now they’re living together while Amelia helps a teenage girl, Betty, with her recovery and Owen raises Betty’s son, Leo. But really, they’re all a family. Enter Teddy.

Everything is really up in the air. What I do know for sure is that an Amelia standalone episode of Grey’s Anatomy is coming at some point in the season, and my guess is that that will involve a lot of relationship, as well as personal, exploration for the complex character. The episode will take place outside of the hospital, which is always exciting. Whether or not that means that Owen will play a role here remains to be seen, but as much as I hope for a reconciliation between the two co-parents, I think this episode could be a make-it-or-break-it moment for them. And when it comes to Grey’s Anatomy, a happily ever after isn’t often in the cards.