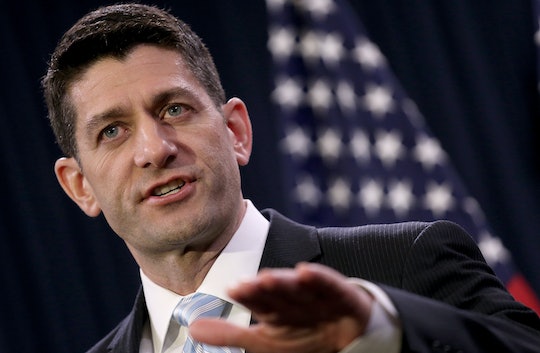 Will Paul Ryan Run For President? He Just Officially Ruled Himself Out

On Tuesday, after much speculation over the past few months that he might consider a contested bid for the White House, Wisconsin representative and current House Speaker Paul Ryan confirmed he will not run for president. Ryan said today from the Republican National Committee's headquarters that he does not want, "nor will [he]" accept the nomination for the Party at the convention in Cleveland this summer. He even added a "let me be clear" when he said it, so he definitely means business. Just in case the delegates didn't hear him the first time, the Speaker reiterated that he believed the party should only nominate a candidate who had run a primary campaign and that they should "count [him] out" for good.

"Count me out: I simply believe that if you want to be the nominee for our party to be the president, you should actually run for it," Ryan told reporters. "I chose not to do this, therefore I should not be considered. Period. I just think it would be wrong to go any other way."

That settles that, right? This all comes as talk of a contested convention at the RNC convention in July has begun ramping up, since neither of the two leading candidates, Texas Sen. Ted Cruz and real estate mogul Donald Trump are likely going to have enough delegates to outright win the nomination (in a contested convention, delegates get to vote for whomever they want to nominate, abiding by a few regulations, of course). Since Cruz and Trump aren't the most popular within the Republican "establishment", there was a lot of speculation that they would nominate the Speaker. Today he put all of that chatter to rest.

Ryan's comments also throw the rumored contested convention into the limelight., Along with the current House Speaker, several other Republicans have been speaking out about sticking with the candidates who have waged primary campaigns, rather than dragging delegate counts to a summer convention. According to CNN, Republican South Carolina Rep. Mick Mulvaney said that his reluctance to wanting a contested convention had nothing to do with Ryan "personally," but that "Republican activists would feel something was taken from them unfairly and they would stay home." Mulvaney even estimated that 60 percent of voters who went out to vote in the primary would protest in November if the party "parachuted" in another candidate, as Virginia Rep. Dave Brat stated in an earlier comment.

The representatives sort of do have a point. It's a strange notion to nominate someone who didn't really put in all of the work during the primary season and who would theoretically not be all that well known to the voter base. Ryan probably seemed like a good idea since he was already, most likely, at least, a household name. Now the party will have to find another politician who would be qualified and willing to do the job if they don't like their options of Ohio Gov. John Kasich, Cruz, or Trump. One thing at least is certain: it will definitely be an interesting season for political junkies.