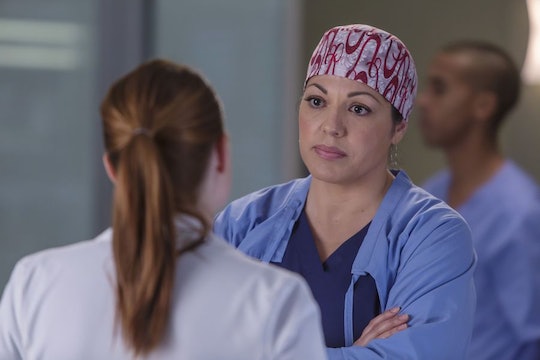 Will Penny & Callie Break Up On 'Grey's Anatomy'? They've Hit A Rocky Path

On Grey's Anatomy, there's been a lot of different ways to say "I love you." "You're my person," is my personal favorite. But, when Penny told Callie on Grey's Anatomy that she loved, her Callie responded with "Thank you." Yeah, not exactly what one wants to hear. To make matters worse, Sofia Sloan (Callie, Mark, and Arizona's daughter, in case you forgot like I kind of did) is brought into the ER for a head laceration and both Callie and Arizona are busy so Penny steps in, not thinking twice about it. Sofia's completely fine and Penny takes care of it, only paging Callie and Arizona once she knows Sofia is fine.

Despite the fact that Penny really did everything right, Callie still claims Penny should've paged her sooner or paged another doctor who knows Sofia. When Penny explains why she didn't call anyone else, Callie then claims that Arizona is uncomfortable with Penny being around Sofia, but we all know that's a bold faced lie.

Penny soon finds out Callie was lying, however, when she apologizes to Arizona for helping Sofia. Arizona is rightly confused and tells Penny she's totally fine with Penny and Sofia being best buds. Arizona then goes off on Callie and tells her not to put her in the middle of her relationship with Penny. Preach, Arizona!

To top things off, Penny then basically says the same thing to Callie, saying it's fine if Callie isn't in the same place that Penny is at in their relationship but it wasn't OK to lie to Penny and make her feel bad when she did the right thing. Now forced to reevaluate every decision she made in this episode, Callie goes to the one woman that has been giving sound advice for the past 12 seasons: Dr. Bailey.

Bailey tells Callie that it's not about whether or not Sofia is ready to meet Penny, it's just about whether or not Callie's ready for Penny to meet Sofia. By the end of the episode, Callie is inviting Penny to join her and Sofia for ice cream. However, as cute as that little moment was, Callie still hasn't said she loves Penny, and as Callie mentioned to Bailey, she's been burned multiple times in her past relationships and she's not sure she's ready to try again. Can Callie push through her fears and give her relationship with Penny her all, or will this issue lead to their downfall?