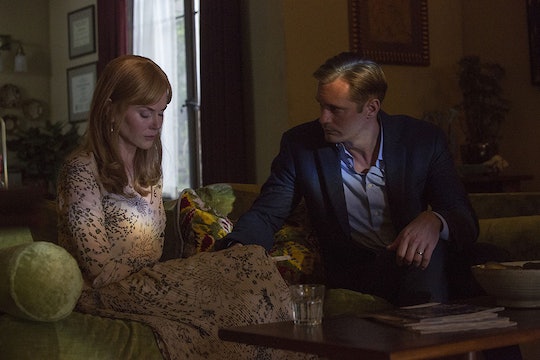 Celeste Fears For Her Safety On 'Big Little Lies'

It seems that with each passing episode of Big Little Lies, Perry just gets worse and worse. In the premiere we saw a glimpse of his abuse towards Celeste, and it's only escalated. One day, he's horrifically violent, the next he appears apologetic, but then the cycle continues. On Sunday's episode, Perry became enraged at Celeste once again, this time about her wanting to go back to work. Are Celeste and Perry the victim and killer of Trivia Night? Will Perry kill Celeste on Big Little Lies? His rage may come to a head.

Before she and Perry had their twin boys, Celeste was a lawyer. She stopped working once they were born; now that they're in first grade, it's clear that Celeste is antsy. She gets a chance to flex her lawyer chops while helping Madeline; some community members want to shut down a production of Avenue Q, and Celeste steps in to represent Madeline in the case to Monterey's mayor. Turns out, Celeste does a stellar job — and she realizes how much she misses her career. She says she's not completely fulfilled as a mother, which is completely fine. Go back to work, girl! Except, it's not that easy for her. Celeste soon goes to her marital therapist to figure out how to address this to Perry, and the therapist points out that she shouldn't be afraid to bring this up with her husband.

Despite her fear, Celeste mentions wanting to go back to work to Perry... and just as she figured, he gets upset. He wants to have another child — he said he would have 10 kids with Celeste if he could. Obviously, this isn't what Celeste wants right now, but he doesn't care much. Perry and Celeste's fights seem to get more explosive as the show goes on. Perry puts on the "honeymoon phase," but it's clear that his violent and controlling tendencies aren't going away. Will this end up in Celeste's demise?

At the end of Sunday's episode, Celeste was going to another meeting about Madeline's case and Perry became violent again. In future episodes, it's likely that Celeste will go behind Perry's back to work again. Maybe this will be revealed on Trivia Night, and Perry murders Celeste. If you've read the novel Big Little Lies, you know how things really turn out, but regardless — the fear for Celeste's life was almost a constant presence in the book as it is in the series. While Perry may not go so far as to kill Celeste, it is sadly not a far fetched idea.