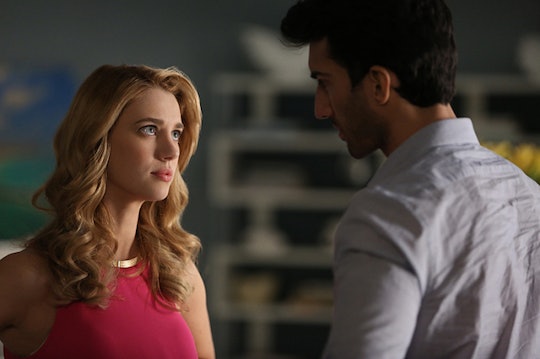 Petra May Be A Threat To Rafael On 'JTV'

When it comes to Petra and Rafael, one day they're in love and the next they're at each others throats. Now that Petra's freed from her paralysis she's ready to fix all the wrongs that have been done to her and won't stand for being taken down again. So finding out Rafael's dirty little secret about his true parentage gives her the perfect ammo she needs but will Petra betray Rafael on Jane the Virgin? Unfortunately for Rafael, he may have played Petra one too many times and there's no doubt she'll use this new information against him.

After discovering he was adopted, Rafael did the smart thing and got a DNA test to make sure it was true, which of course it was. To make matters worse, while looking through some of his files he found an addendum to his father's will that stated his possessions and money would go to his biological children. It seems his father did know, or at least suspected, that Rafael wasn't actually his biological son and made the change so Rafael couldn't inherit his fortune and the Marbella hotel. However, his lawyer told him that since the addendum wasn't probated (the official proving of a will, I looked it up) then as long as no else knew about it Rafael was good to go. Too bad for Rafael, someone else did know about it and worse she had the whole conversation on tape.

At the start of the episode, Petra had suspected Rafael and Scott had worked together to manipulate her, which they had. However, Rafael made her second guess herself, leading her to believe that what Anezka did to her left her paranoid. Thankfully for Petra, she was smart enough not to trust Rafael and, dressed as Anezka, got the truth from Scott. Using this information, she confronted Rafael, but also used that opportunity to leave tiny cameras hidden all around his room, which is how she found out about the will.

Petra was clearly pissed that Rafael made her question her own judgement and tricked her. Now that she has the upper hand, she'll definitely use it to her advantage — the only question is how? If she ousts him as the adopted child he is he loses his fortune, which doesn't benefit her because she has too children with him who'd also lose their inheritance. It's tricky situation Petra has found herself in, but I have no doubt she's just devious enough to make this work for her while also hurting Rafael in the process.