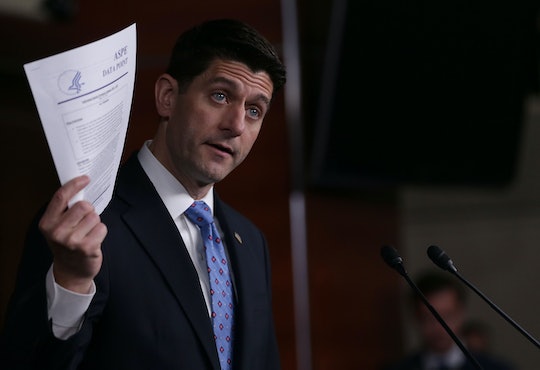 How The AHCA Could Impact Pregnancy Complications

As most women are already aware, pregnancy is a tricky, beautiful, complicated process. There's really nothing easy about it, despite the myriad men in Washington trying to convince themselves to the contrary. And as one of President Donald Trump's long-standing campaign promises — to repeal and replace the Affordable Care Act — seems closer than ever to actually being implemented, many women are rightfully concerned. The American Health Care Act, as it has been officially dubbed, has already passed in the House of Representatives, and now awaits debate in the Senate. With so much freedom being given to the states in the new bill, will things like pregnancy complications rise if the ACA is replaced? Unfortunately, if the AHCA passes as-is, being a woman in the United States could get a lot more expensive, and dangerous.

With the bill's MacArthur Amendment, insurance companies in different states would be granted the power to refuse full coverage to Americans with pre-existing conditions, as well as get rid of Obamacare's essential health benefits package, which included pregnancy and maternity care. As Obamacare made certain that all women, regardless of income, could have access to proper health care — especially where maternity care was concerned — its repeal could actually mean that the amount of pregnancy complications could arguably climb in the United States, as some women would be booted from the system altogether.

As TIME aptly put it,

So what happens if you're one of the 50 million-plus people who live in a state that seeks out these waivers, and you become pregnant? You can purchase a rider, estimated at an additional $1,000 per month. The average pregnancy and delivery could cost over $3,000 out-of-pocket even with private insurance; the riders would add a few thousand dollars to that total.

Hypothetically speaking, a woman who previously relied on the ACA to cover her pregnancy costs would likely not be able to afford coverage under the AHCA, as premiums will likely rise exponentially, especially if she's had a C-section before.

So, without health care, how is this imagined woman supposed to know if there's something wrong? She likely can't, to put it simply. And if that happens, she'll likely have even more health problems during, and after, delivery. Things may even snowball and cause longterm problems both physical and financial.

It's pretty obvious that when people have access to affordable health care, they're generally healthier. As The New York Times reported back in 2016, under the ACA, "People have become less likely to have medical debt or to postpone care because of cost." That in and of itself should be reason enough to not threaten access to health care.