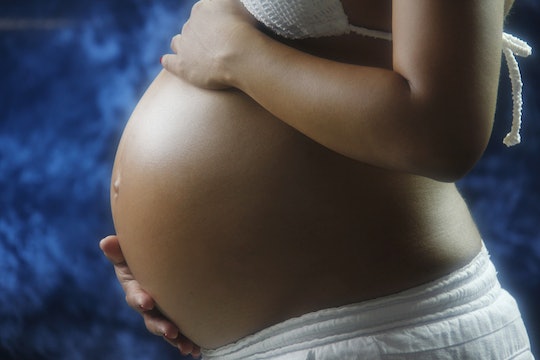 Many women will be diagnosed with an ovarian cyst in their lifetime. An ovarian cyst is a fluid-filled sac that can develop on one of your ovaries. They are usually painless, but sometimes they can cause a good deal of discomfort. Because most ovarian cysts are caused by ovulation, you may wonder, "will pregnancy cure ovarian cysts?"

Let's first discuss how you can develop an ovarian cyst.

One of the most common cysts, called the corpus luteum cyst, occurs after ovulation. The follicle sac, or the corpus luteum, usually breaks down and dissolves after releasing the egg. But sometimes, as WebMd explains, the follicle opening seals off and fluid accumulates inside, causing the corpus luteum to become a cyst. If the follicle doesn't rupture at all or doesn't release the egg, it can also collect fluid, and increase in size turning into a what is known as a follicular cyst.

But these are not the only type of cysts. According to Healthline, other ovarian cysts include dermoid cysts which are sac-like growths on the ovaries that can contain hair, fat, and other tissue. Also on the ovaries are cystadenomas, or non-cancerous growths that can develop on the outer surface, usually in women over 40, according to Dove Med. There are also endometriomas which, as Medicinenet explained, are a type of cyst formed when endometrial tissue grows in the ovaries and are often filled with dark, reddish-brown blood.

Because some ovarian cysts cause no symptoms, it is common for a woman to become pregnant and then be diagnosed with a cyst during her ultrasound. Unfortunately, if you are hoping that being pregnant will cure your cyst, New Kids Center reports that it cysts can increase in size during pregnancy, becoming very large.

"Larger cysts have the potential to cause severe pain if they twist, or even to prevent the baby's head engaging at the end of pregnancy," according to The Daily Mail. In cases like these, a doctor may recommend to surgically remove the cyst midway through your pregnancy. Baby Center warned that if a cyst develops on a stem from an ovary and becomes twisted, it can cause extreme pain, and your ovary could be damaged. Your doctor will likely advise you to have the cyst removed, whatever stage your pregnancy has reached. Although all surgery carries some risk, they must be weighed against the potential risk of leaving the cyst in place.

Pregnancy, it seems, is not a cure for ovarian cysts. In fact, in some cases, they can make the cyst bigger. If you have an ovarian cyst and are considering getting pregnant, talk to your doctor about treating your cyst prior to trying to conceive.

More Like This
All Your Questions About Getting Pregnant After A Tummy Tuck Answered
A C-Section Actually Doesn't Take As Long As You Think, According To Experts
All The Reasons Why You Might Have A C-Section
Breaking Down The Different Types Of Postpartum Infections