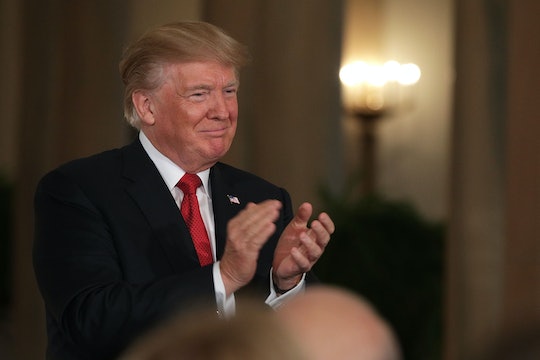 Here's What Trump's Executive Order Will Do To Your Premiums

President Donald Trump has long promised that he would repeal and replace the Affordable Care Act — aka Obamacare — and even vowed as a candidate that he'd get it done in his first 100 days in office. That's obviously proven to be a much more difficult task than anticipated though, so after failing to repeal the ACA in Congress, Trump took matters into his own hands Thursday, and announced that the government would stop funding Obamacare subsidies. Trump claimed this would be great for Americans, but will premiums go down with Trumpcare? The president has said he'd provide the country with a health care plan that was better and cheaper than the ACA, but actually, premiums are likely to increase for many Americans — that is, if they're even able to get health insurance in the first place.

The federal subsidies targeted by Trump are a key element of the ACA: by off-setting the cost of health insurance premiums, the subsidies have allowed millions of previously-uninsured Americans access to health care. According to Politico, the government was set to pay out an estimated $7 billion this year in monthly installments, but in a statement Thursday night, Press Secretary Sarah Huckabee Sanders confirmed they would end, claiming "there is no appropriation for cost-sharing reduction payments to insurance companies under Obamacare,” and that "the Government cannot lawfully make the cost-sharing reduction payments."

That might be a win as far as Trump is concerned, but others are warning that the move could be disastrous. According to an analysis by the Kaiser Family Foundation, ending the payments puts insurance companies on the hook for major revenue shortfalls, meaning that they will either hike up premiums to cover the loss, or just back out of the Obamacare marketplace all together. And in many cases, according to CNN, that's already happening: many insurers have already increased their rates as much as 20 percent for 2018, while others have left, having anticipated that Trump would ultimately put an end to the subsidy payments at some point.

For the nearly 6 million Obamacare enrollees who receive subsidies, Trump's decision will likely put their health insurance at risk, and it's caused even members of the president's own party to bristle, according to CNN. In a tweet Thursday night, Florida Rep. Ileana Ros-Lehtinen slammed Trump, writing, "Cutting health care subsidies will mean more uninsured in my district. @POTUS promised more access, affordable coverage." On the Democrat side, Senate Democratic Leader Chuck Schumer and House Democratic Leader Nancy Pelosi condemned the move in a joint statement, calling the decision "a spiteful act of vast, pointless sabotage leveled at working families and the middle class in every corner of America," according to Reuters.

To be fair, some Americans may see a decrease in their premiums as a result of Trump's attempt to dismantle the ACA. In an executive order on health care Thursday, the POTUS also proposed changes that would allow the long-term formation of association health plans governed by federal employment law, according to The New York Times, meaning that they'd function outside of the current state insurance regulations.

For young, healthy customers, this would be one way to circumvent the ACA marketplace, giving them the chance to purchase skimpier health insurance with low premiums thanks to their good health status. But that individual benefit will certainly come with consequences: by allowing those in good health to exit the market, it will weaken the entire system, and put those who are older or in poor health at risk of losing coverage — as in, the very individuals that the ACA was designed to protect.

With these two actions, Trump has made it pretty clear that he no longer expects his party to accomplish his "repeal and replace" goals — and in fact, when explaining the order to Fox News, according to CNN, the president said,

I can sign it myself, I don't need anybody. I would have done it earlier, except I was hoping that [the GOP] was going to put this through and I'd have it in the bill.

More than anything though, it seems to prove that Trump isn't backing down from his desire to see Obamacare crumble, and in the end, he may just get his wish. But anyone who's been hoping that Trumpcare would truly be a more affordable, higher-quality option for health insurance will likely end up disappointed. So far, it really just seems like Trump will make it harder for millions of Americans to keep their health insurance — a move which, honestly, is pretty disgraceful.