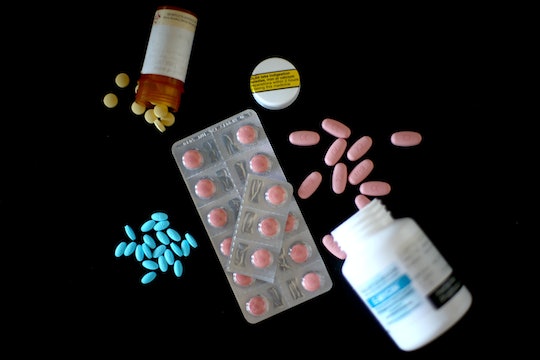 Will Prescriptions Be Covered Under Trumpcare?

It had been a long-standing objective of the GOP to undo all of the progress made by the Affordable Care Act, former President Barack Obama's historic health care reform legislation. On Thursday, that goal was achieved when House Republicans overwhelmingly voted to pass the misguided American Health Care Act, or Trumpcare. The revised bill will repeal and replace the ACA, allowing states to opt-out of its key provisions such as covering essential health benefits. That's led many to ask: Will prescriptions be covered under Trumpcare? It would depend on where you live.

Prescription coverage is considered an essential health benefit under the Affordable Care Act. That means all insurance plans will help cover the costs of certain medications, according to HealthCare.gov. Not all prescriptions are covered under the Affordable Care Act, though; those that are vary by plan. But the ACA mandates that prescription coverage must be a part of any health care plan.

If not all medications are covered under the ACA, then what changes with Trumpcare? Mainly costs. A critical part of the updated AHCA bill is that states can waive certain ACA provisions, which would exempt insurers in those states from having to cover essential health benefits like maternity care and prescription costs. So if the medication you're taking to survive is currently covered under your plan, you could lose that benefit if the AHCA is enacted, according to ABC News. And that would increase your financial burden astronomically.

How? Either through higher premiums or out-of-pocket drug costs. According to ABC News, insurance carriers in those states would most likely increase premiums on policies that include essential health benefits because they will "assume that a person who signs up for a plan with maternal care or prescription benefits will be likely to use those benefits." On the other hand, if you elect not to include prescription coverage with your health plan so that you could pay a cheaper premium, you would most likely face high out-of-pocket medical costs.

If you waive hospitalization or prescription drugs, then it starts to make the policy cheaper, for sure. But you're also back to part of the [bulletproof] vest again.

Although the GOP is hailing the passage of the AHCA as a victory, it's actually terrible for everybody, even drug makers. According to STAT, pharmaceutical companies would save money because Trumpcare would eliminate fees imposed under the ACA. But these companies also are at risk of losing millions of new consumers who were insured under the ACA, either in the private market or through Medicaid.

In the end, the revised AHCA is just a nightmare come to life.