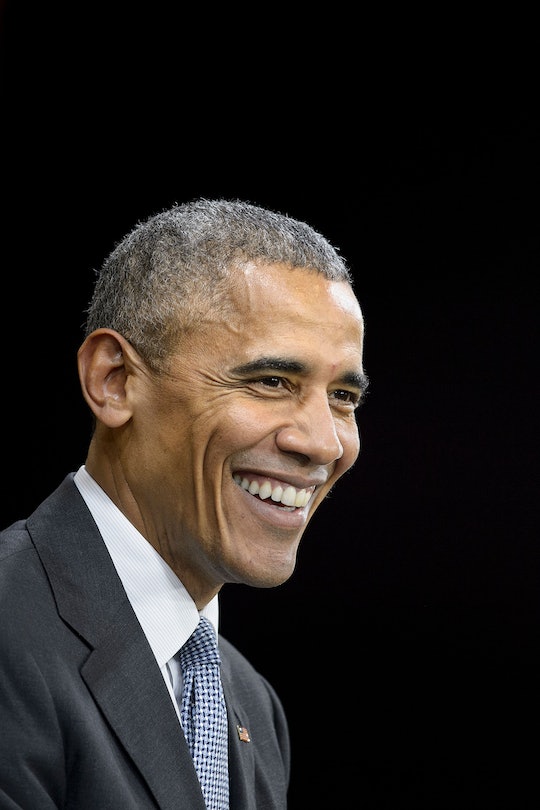 Will President Obama Return To Politics? Some Are Hoping He Will

Somewhere in a parallel universe, former Secretary of State Hillary Clinton won the presidency, and President Obama, content with the state of the union, plans to vacation in Tahiti come February. But this is not that universe. In our own universe, President-elect Donald Trump will inhabit the Oval Office, a scenario that begs the question: Will President Obama return to politics? According to an interesting new Change.org petition, it's certainly possible.

The petition, which received 500 signatures just yesterday, calls for Obama to run for Congress. Surprised? Don't be. While past presidents in recent memory haven't returned to elected office, the precedent is there. According to a Slate article on Obama's theoretical run, John Quincy Adams, who was the nation's sixth president, was a congressman for 17 years after serving a single term as president. Indeed, Adams was elected to Congress nine times, and his congressional career ended only after he had a stroke on the House floor and died two days later.

Nearly 170 years after Adams' death, there is a call for Obama to follow in his footsteps — or, perhaps, to stand on his shoulders. The plan proposed at Change.org is elegant but not necessarily simple. It calls for Bobby Rush, the current Democratic seat holder for Illinois' 1st congressional district, to step down in 2018. This would allow Obama, who has a residence in this Chicago district, to run for the seat with the understanding that he would serve as a congressional leader, if not as Speaker of the House.

Sure, it's been 12 years since Obama last ran for Congress, but it's like riding a bike, right? In that 2004 Senate race, Obama defeated his opponent with 70 percent of the vote. And it's this precise popularity that's fueling the public's desire for another Obama candidacy. Given the urgent importance of taking back the House in 2018, it makes sense for the Democrats to brings their best players to the table. In the 2018 midterm election, Democrats will be defending 25 seats, while Republicans will be defending only eight. According to the petition,

We need a leader to keep Democrats united and organized, to recruit the strongest possible candidates for every seat, to keep all those candidates on message, and to help them raise the money and mobilize the resources they need to compete and win — and in the meantime to keep enough heat on GOP incumbents to pressure enough of them to stop or delay Trump and Ryan's most dangerous plans. There is only one person who can credibly lead such an effort.

It's unclear whether Obama would be interested in such an undertaking, but it does appear that he intends to remain politically active. In October, The Washington Post reported that Obama will be involved with The National Democratic Redistricting Committee, a new group that will "focus on key legislative and gubernatorial races, voter initiatives and legal fights." According to The Post, "Obama’s decision to back such a broad, organizing political effort after leaving the White House marks a rare, if not unprecedented, step in the modern era."

It's easy to imagine that after Trump's win, Obama's interest in a future political career might have further deepened. Obama's legacy is on the line. Just this week, Trump threatened to "terminate" the recent Cuba deals to normalize trade relations between Cuba and the United States. Trump has promised to repeal and replace the Affordable Care Act, dismantle the Iran deal, and has vociferously opposed DACA, the Deferred Action for Childhood Arrivals program that has shielded certain categories of children of undocumented immigrants from deportation.

There's certainly a lot at stake, and it's in the realm of possibility that Obama could soon be on another ticket.