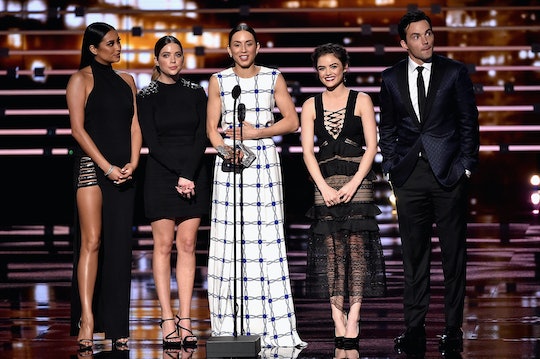 'PLL' May Prove To Be The People's Choice

It's been seven years since the mystery of "A" began on Pretty Little Liars. Since then, the show has snagged three People's Choice Awards and five nominations total. So will Pretty Little Liars win a 2017 People's Choice Award before it embarks on its final season? This year the show has been nominated again for Favorite Cable Drama and as the reigning champs they have a pretty solid chance of going home with the prize. However, the competition is stiff this year. The popular drama is up against The Americans, Bates Motel, Mr. Robot, and Queen Sugar.

Ashley Benson and Lucy Hale are also up for People Choice Awards this year. They've both been nominated in the Favorite Cable TV Actress category along with the likes of Hilary Duff (Younger), Keri Russell (The Americans), and Vera Farmiga (Bates Motel). This is Benson's third time being nominated and Hale won the award in 2014 and has been nominated two other times as well. Hale also received a nomination for Favorite Country Female Singer in 2015 after the release of her first album Road Between. I'm still impatiently waiting for the follow up to that album, by the way.

Though this isn't Pretty Little Liars' last chance to win a PCA (that'll be next year), the fact that this year is when the show ends makes this particular moment feel sentimental. Whether you've stuck with the show from the very beginning, left it and came back (like I did), or binge watched it on Netflix, PLL means so much to a lot of people. It'd be great to see the cast start their farewell tour with another award, especially one coming from their fans.

So hopefully the #PLLSquad voted in droves and got the show another award to add to their ever-growing collection. They really deserve it after everything that Uber A put these girls through last season. Between the most suspicious doctor that ever lived, accidental murders, secret parents, and so much more, executive produce I. Marlene King and the cast definitely stepped up their game. I mean, heads literally rolled! If that doesn't deserve an award, I'm not sure what does.

Tune in to see if Pretty Little Liars wins again by watching the People's Choice Awards at 9 p.m. ET on Wednesday, Jan. 18 on CBS.