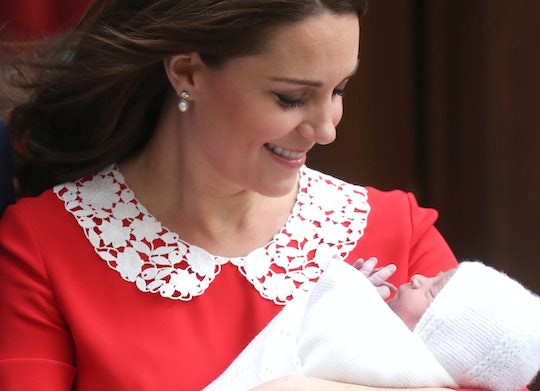 Will Prince Louis Be Baptized or Christened, & Is There A Difference?

Now that the newest royal baby has arrived, Anglophiles are anxious to see what's next for the fifth in line to the throne. The British monarchy is steeped in tradition, so some may be curious to learn if Prince Louis will be baptized or christened, and whether there's any difference between the two terms. A christening is a person's official admission into the church, and baptism is just one of the rites performed during the christening ceremony — the part when water is poured over the baby's head.

However, the terms "christening" and "baptism" are commonly used interchangeably, and the Church of England itself says there's no difference, just as people are married at a wedding; to marry or wed are one and the same. There's no official word yet on Louis' christening (the preferred term of he royal family, because they're fancy), but every one of his predecessors went through the ritual, so there's no reason to think that he won't. According to The Sun, royal babies are traditionally christened two to three months after their birth. Louis was born on April 23, so that would put his christening around late June, or sometime in July. And there are a few more details left to cover.

One safe bet is that Louis will wear the same gown that his older brother and sister wore for their christenings; it's the official costume of royal babies. According to the Telegraph, it's a silk and lace replica of a Victorian gown made in 2004. The original was used at every royal christening since 1841, when it was commissioned for the christening of Princess Victoria. The design was meant to echo the wedding gown of her mother, Queen Victoria. But after more than 160 years of wear and tear, it became too fragile to use anymore, so the new one, first used by James, Viscount Severn, will be brought out once again.

One thing that's not always the same is the church where the royal christening will be performed. In the past, christenings were celebrated only in royal palaces, with Prince George's taking place at the Chapel Royal at St James's Palace in London. But the Duke and Duchess of Cambridge broke that tradition for Princess Charlotte's christening, the Telegraph reported, choosing instead to use the church of St Mary Magdalene on the Queen's Sandringham estate in Norfolk, where the family goes for Christmas.

We don't yet know who the godparents will be, but there are sure to be a lot of them. George has seven, according to the BBC: Oliver Baker, Emilia Jardine-Paterson, Earl Grosvenor, Jamie Lowther-Pinkerton, Julia Samuel, William van Cutsem, and Zara Tindall. Charlotte has only five, the Guardian reported. They are Laura Fellowes, Sophie Carter, James Meade, Adam Middleton, and Thomas van Straubenzee.

For an heir to the throne, you can't just use any old holy water in whatever container you have lying around. Louis will undoubtedly be christened with water from the Lily Font, part of the crown jewels that, like the original gown, was commissioned by Queen Victoria. Express reported that it's been used for every royal baby since, except for Princess Eugenie. And the royals will use water from the River Jordan, where they believe that Jesus was baptized by John the Baptist.

One more thing we can safely assume is that the ceremony will be closed to the public, as George and Charlotte's were. Unlike the sprawling guest lists of royal weddings, christenings tend to have just 20 or 30 guests, according to the Telegraph. But when Charlotte's was held in 2015, the Duke and Duchess did open up the church grounds to well-wishers, so if you're near Norfolk and feel like gawking, keep your schedule clear just in case.