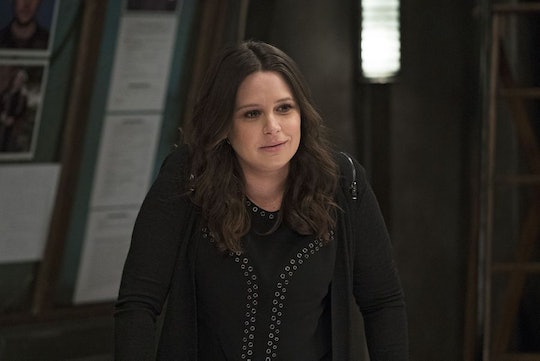 The 'Scandal' Season 6 Finale Delivered A Shocking Twist For Quinn

Out of all of the twists and turns that came during the season finale of Scandal, one of the most out-of-left-field moments had to be Quinn's pregnancy announcement to Abby, of all people. But will Quinn keep the baby on Scandal? The Season 6 finale was full of plenty of surprises and suspense, but the idea of Quinn and Charlie with a baby is probably something not a lot of fans had really considered up until this point.

While there haven't been many babies on Scandal, this isn't the first time one of the main characters found themselves pregnant. Earlier in the series, Olivia got pregnant with Fitz's baby and had an abortion, which he didn't find out about until much later. So regardless of what Quinn's choice was going to be, it would've been solely up to her if she had a baby or even gave the baby up for adoption.

Quinn said herself that neither she nor Charlie are necessarily cut out to be parents. "People like Charlie, people like me, we're dangerous," she told Abby. Which is true, since as it had been pointed earlier in the episode, she does seem to enjoy killing and Charlie does it without a second's thought. So will Quinn keep the baby on Scandal or will the Season 6 finale be the last viewers hear about the pregnancy?

It didn't take long for Quinn to warm up to the idea of keeping her baby, but that also almost meant her departure from OPA even though she was just given the reins by Olivia. But, as Quinn told Abby (also loving Quinn's sudden need to confide in her), she could probably go back to a normal life, but she couldn't see Charlie doing that. However, Charlie ended up being beyond thrilled with the news.

In real life, Katie Lowes, who plays Quinn on Scandal, is currently pregnant with her first child, so with Quinn now being pregnant, this seems like it was Shonda Rhimes' way of writing the pregnancy into the show instead of using some handy wardrobe and prop tricks to hide her belly, a la Kerry Washington.

But with Season 7 being the last and Rhimes reportedly pulling out all the stops to end the series on a high note, there's a good chance that Quinn's pregnancy on Scandal mights be a major plot point for the character next season. And now that she finally told Charlie and she and Abby had the perfect moment to fix their relationship, at least someone might be getting an eventual happy ending.