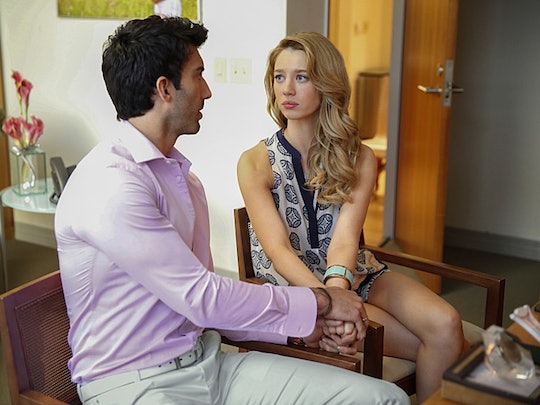 Will Rafael & Petra End Up Together On 'Jane The Virgin'? Never Say Never

Despite the fact that Rafael and Petra started off married on Jane the Virgin, their relationship has been a mess from day one. Petra was cheating on Rafael and lying to him, plus she wasn't afraid to use any means necessary to manipulate him for her own ends. However, there was some deeper feeling in their marriage even if it got lost in the drama. Petra married Rafael for his money, but she did fall in love with him and she also cared for him throughout his battle with cancer. Now in addition to sharing a business, they have two daughters, which only strengthens their connection. But will Rafael and Petra end up together on Jane the Virgin?

Rafael and Petra's relationship can often feel one-sided, with a focus on Petra's feelings as opposed to Rafael's. Even though she did a lot of things designed specifically to hurt him and those he loved (as the Narrator reminded everyone in "Chapter Forty-One"), Petra still loved Rafael underneath it all. She's been motivated by selfishness and jealousy, but she's genuinely fallen for him. She's also not afraid to call Rafael out on his own selfishness and dishonesty, and he does the same for her. Their divorce has been surprisingly honest, considering their marriage was anything but.

Watching Petra and Rafael forge a deeper understanding of each other post-breakup has made their relationship more interesting. They tend to fall somewhere between exes and friends, with Petra's occasional flares of Jane-related jealousy the only hint of something more – for the most part. Rafael has been fairly unwavering in his feelings for Jane, but Petra's pregnancy drew them closer and they even shared a kiss... Until Petra rightly shut him down for using her as a Jane replacement.

Make no mistake, Petra and Rafael would have a lot to overcome if they ever decided to really try their relationship again. They both have the very definition of baggage, but if they have shown anything post-divorce it's that they're able to talk out their issues a lot more easily than they could as husband and wife. It's possible they just make great friends and will never go down that road again. But they tried for years to forge a family together and now they have one, for better or worse.

On a show like Jane the Virgin, you can never say never.