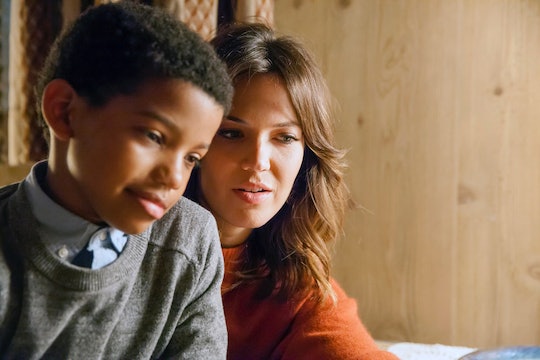 Will Randall Forgive Rebecca On 'This Is Us'? Thanksgiving Brought A Secret To Light

Since Randall was born on This Is Us, his relationship with his mother, Rebecca, has been a complicated one. Adopting a child immediately after losing another one made it difficult for Rebecca to bond with her new son. But once she dealt with her grief, her connection to Randall became very solid. Out of all the triplets, Randall seems to share a particular closeness with his mom, which made it all the more heartbreaking when he discovered that she had been lying to him his entire life. He had always wanted to connect with his birth parents, but never knew where to find them, and had no idea that Rebecca had the answers all along. Thanksgiving dinner brought everything out into the open, but now that he knows the truth, will Randall forgive Rebecca on This Is Us?

The great painful irony of Randall's newfound relationship with his birth father, William, is that they found each other at the worst possible time. William's terminal cancer means that every moment Randall has with him is slipping away almost as soon as it happens. They could have had a lifetime to get to know each other if Rebecca hadn't kept William from Randall. As far as betrayals go, it's a deep one. And honestly, who could blame Randall if he never got over it? The episode ends without a resolution, because this isn't a situation that can be resolved neatly.

Rebecca realized who William was shortly after Randall was born, when she noticed him watching her across the street from the hospital. She tracked him down surprisingly easily from there (especially considering the lack of internet to help her) and went to his apartment to discuss the son he had just given up. William was the one to help Rebecca untangle her feelings of grief over the loss of one of her children and he also provided Randall with his name change. However, when he asked if he could have access to his son, Rebecca firmly denied him.

It seemed like that was the end of it — and that was bad enough — until Thanksgiving dinner brought even more revelations. While in William's apartment, Randall discovered a letter in his desk with very familiar handwriting. It was a letter from Rebecca to William, and a pretty incriminating one at that. Not only did it contain a picture of eight-year-old Randall, but it made references to seeing William again "after all these years." Rebecca met William more than once, perhaps even after he was sober, and still kept it a total secret.

It's no surprise that this news would leave Randall reeling. Both he and William are aware of just how much time they don't have left together, so learning they could have had more is bound to mess Randall up for a long time. Whether this becomes an insurmountable obstacle in Randall's relationship with Rebecca is up in the air. He'd be justified in holding a grudge, but Randall also loves his family too deeply to sever ties forever. Still, the journey towards forgiveness is definitely going to be a bumpy one.