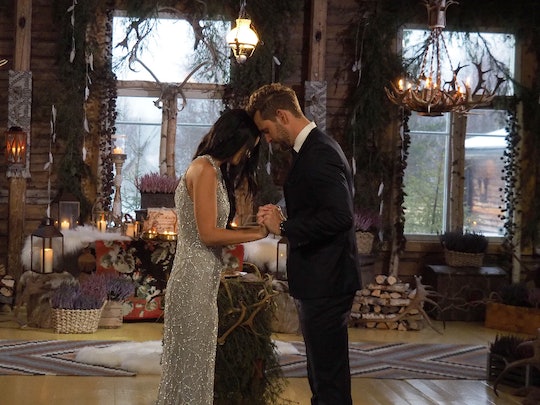 Raven May Appear On 'Bachelor In Paradise'

Raven may not have won Nick's heart on The Bachelor, but that doesn't mean she's no longer in Bachelor Nation – in fact, she may have just secured her place. Like many Bachelor rejects before her, doors open after the season wraps up. For some, this means Sugar Bear Hair endorsements on Instagram. For others, this means that and a stint on Bachelor in Paradise, where former contestants come together to try to find love... again. Will Raven be on Bachelor in Paradise? She dropped some major hints while on After The Final Rose.

Raven going on Bachelor in Paradise certainly wouldn't be the first time it happened. In fact, that's exactly what the show is comprised of: former contestants who lost. How could we forget the iconic people from last season, such as Chad from JoJo's Bachelorette season – oh, and Nick himself? Yes, Nick went on Bachelor in Paradise to try his hand at love again, only to leave alone... again. That time, though, he did not get rejected – he turned down his suitor, Jen. Regardless, Nick did not leave engaged as he hoped when he entered Paradise. Will Raven join the ranks of Bachelor rejects to wind up in Paradise, looking for love again?

On After The Final Rose, Raven made it clear that it's definitely a possibility – if not already a done deal. She said she was still looking for love, and Chris Harrison mentioned he has "something going on in Mexico" this summer – our favorite, Bachelor in Paradise. Seeing as the past seasons have had contestants from very recent Bachelor and Bachelorette seasons, it may just happen. If Raven wants to be in Paradise, Chris Harrison will make it so.

Stay with me here: I thought Raven initially auditioned for The Bachelor when it was rumored that Luke Pell was going to star. Obviously that didn't happen, but Raven was a favorite this season as Luke was during his Bachelorette season. Perhaps they will both end up in Paradise this summer, and magic will happen. Maybe? Okay, not likely – but also not impossible. If Nick Viall has taught us anything, it's not anything could happen in Bachelor Nation. Despite being dumped by Nick, Raven looked radiant on After The Final Rose. She seemed over it and ready to start a new adventure – and that adventure may very well be in Mexico with Chris Harrison and Jorge the Bartender.