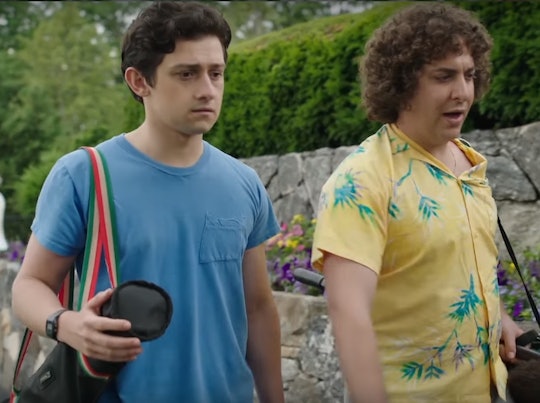 The Fate Of Amazon's 'Red Oaks' Has Already Been Decided

When a streaming service like Hulu, Netflix, or Amazon Prime comes out with a new show all at once, it’s almost impossible not to immediately wonder what comes next after a healthy binge watch session. Like with Red Oaks, which has had a seemingly successful first two seasons. But now that Season 3 is available for streaming, will Red Oaks return for Season 4? Fans definitely deserve some closure and a way to tie up everything surrounding David (Craig Roberts) and his relationship troubles.

According to Deadline, though, that closure is going to come in the form of Season 3 and nothing more. The third season will be the show's final installment. Like Netflix, Amazon seems to keep their ratings and viewer numbers close to the chest, but because the streaming service decided to nix Red Oaks after its third season, perhaps the numbers just weren't up to snuff. However, fans can take comfort in knowing that Red Oaks was at least doing well enough to stay afloat this long. In the past, Amazon has had no problem cancelling shows after just one season, like 2016’s Good Girls Revolt.

The first two seasons of Red Oaks followed David as a tennis instructor at a private club as he embarked on many relationship adventures, which didn’t always have positive endings to them. But since Season 2 ended in a rather finalized way, it makes you wonder what’s in store for Season 3, especially since there won’t be a Season 4 of Red Oaks.

According to the New York Daily News, Season 3 of Red Oaks will no longer be set at the New Jersey country club as the seasons before it, but instead in 1980’s New York City, which for some fans, is the perfect way to say goodbye to David as long as he can make some of his filmmaking dreams come true.

"I definitely share the frustration of wanting to be a filmmaker and make films because it's one of the jobs where you tell people you can do it," Roberts told the outlet. "But there's no way of proving it unless you have millions of [dollars] to do something." But even if he shares in the woes of his character on Red Oaks, Roberts is also excited for where things might be heading for David as the series draws to a close. "I never knew that it would go this far when I read the pilot," he admitted. "I never thought it would go all the way down the rabbit hole of [David] doing it so I’m very happy that he has. It's very, very cool."

Throughout the series, David’s dreams of doing something beyond his job at the country club were a big part of his character, so branching off to the city and away from the simpler life in New Jersey is certainly going to be a learning experience for him. But, if Red Oaks has shown fans anything, it’s that David is resilient enough to make things happen for himself.

Unlike some shows that never get that solid final episode to wrap things up, Red Oaks is at least getting an official send-off and a way to tie everything together before the third (and final) season comes to a close. As hard as it’s going to be to say goodbye and not get a Season 4, getting closure at the end of it all is definitely a plus.