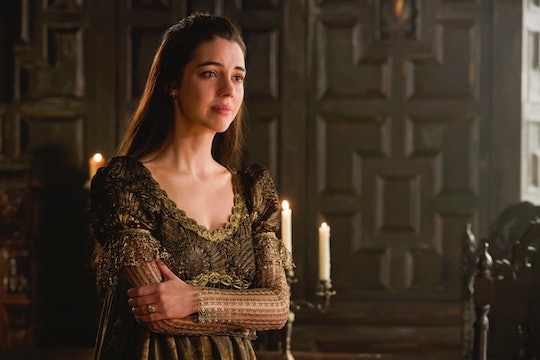 Will 'Reign' Be Crowned With A Fifth Season?

Reign took fans on a trip back into history by looking at the life of Mary, Queen of Scots, and later on, at the life of Queen Elizabeth I. While the show has had its fair share of historical inaccuracies (which is to be expected in a fictionalized representation), that didn't deter fans. In fact, the series was beloved so much that it went on for a full four seasons. But now that the fourth season is coming to a close, will Reign return for Season 5? Unfortunately, the fourth season will be its last.

Back in December of last year, it was announced that Reign was cancelled and Season 4 would be the last season. The show was given 16 episodes to close the show out and thankfully, since the writers knew the end was coming, the finale should give fans closure. However, if the series sticks to history, there's really only one way the show can end: with Mary's death.

The past two seasons of Reign have seen Mary go hea- to-head with her cousin Queen Elizabeth, amongst many other dramas currently happening in 16th century Europe. Historically, Mary's story comes to an end when she looks to Elizabeth for help and in return Elizabeth has her arrested, put into captivity, and then executed. Clearly, this family is really close.

However, the show seems nowhere near close to that ending, so it may choose to close out the show in a different way. Though Mary did ask her cousin for help in the penultimate episode, Mary's still in Scotland at the moment, and definitely not in a cell in England. Also, her husband Darnley is still alive and he's supposed to die a good 20 years before Mary's death.

Unless the show plans to make an extraordinary time jump in the finale, it seems unlikely the show will end with Mary's execution. Still, the show could choose to deviate from the history books and do what they want. In either case, hopefully the end is everything fans hope it to be.

Mary has come a long way since the show first began. At the start, she was a young girl whose life was being threatened because of a crown that she couldn't even really use to her advantage yet. She was queen of a country that she hadn't been to in years and was placed in an arranged marriage that ultimately ended in tragedy. Throughout the series, Mary has grown into a formidable queen who will now stop at nothing to help her country succeed and protect her son.

You can see how Mary and Elizabeth's stories come to an end when the series finale of Reign airs on Friday, June 16 at 9 p.m. ET on The CW.