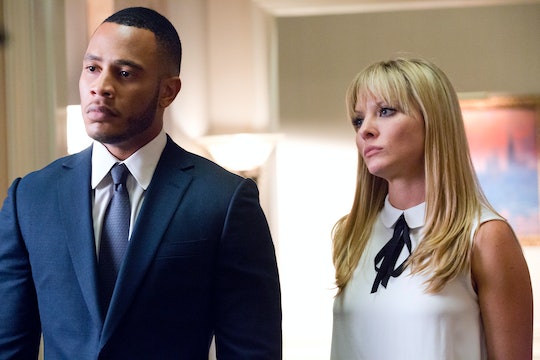 Will Rhonda Lose the Baby On 'Empire'? Season 2's Return Could Be Devestating

The mid-season finale of Empire left us with the mother of all cliffhangers: an obscured villain pushes Rhonda, Andre Lyons' very pregnant wife, down their entryway's grand staircase in the middle of the night, while no one else is home. So, will Rhonda lose the baby on Empire? It would be a devastating loss for Rhonda, Andre, and really all of the Lyons, but it wouldn't be completely off-brand for Empire, as tragic things tend to happen.

In December, Empire showrunner, Ilene Chaiken, gave a huge hint about the fate of Rhonda's baby. The mid-season return episode is entitled "Death Will Have It's Day," and, at the time of the interview with TVLine, it was known that Empire cast the role of a grief counselor for the second half of Season 2. There was speculation that perhaps Rhonda didn't survive the fall, which doesn't seem possible since Chaiken told The Hollywood Reporter that the return of the show would bring "Rhonda and Andre figuring out whether this was an accident, a cruel twist of fate" or more, so it sounds like Rhonda is alive, but maybe not well. By a process of elimination, then, we can conclude that perhaps the grief counselor is brought on to counsel the Lyon family through the late-term loss of Rhonda's pregnancy.

We know that Lucious was deeply attached to the prospect of having a grandchild, and, in fact, it even motivated him to invite Andre back into the fold. Of course, when Rhonda reveals this information to a lost, mistreated, and pregnant Anika, the wheels start turning.

While we don't explicitly see Anika push Rhonda down the stairs, we're definitely meant to infer that she's the culprit, especially after we see a similarly unhinged plot in which she disguises herself as a chauffeur to drive Hakeem's new crush Laura home — presumably not an innocent attempt to get to know her better. Anika is pregnant with Hakeem's baby, and desperate to be invited back into the Empire. If she can eliminate Hakeem's other potential love interest, and the other potential heir to the empire, then the way is paved for her triumphant return — provided she doesn't get caught.