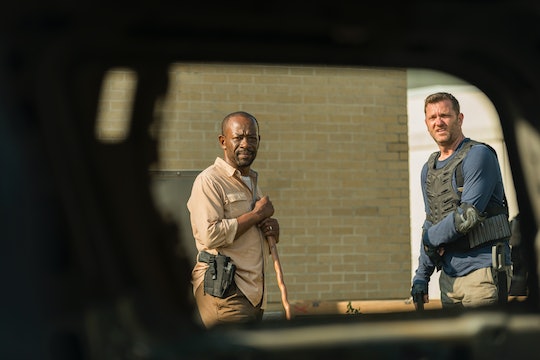 Richard May Make A Bold Move On 'The Walking Dead'

When it came to joining the fight against Negan on The Walking Dead, King Ezekiel made his position clear: he was Switzerland. In an attempt to maintain the tenuous peace between the Kingdom and the Saviors, Ezekiel was staying out of the battle. His position was understandable; Ezekiel has been known to prize his people's safety and happiness above all else, and because the Saviors have respected their deal so far Ezekiel has no reason to believe that wouldn't continue. Not everyone was on board with this plan, however. Ezekiel's right hand man Richard had already tried to circumvent his king once before, but will Richard betray King Ezekiel on The Walking Dead?

Richard respects Ezekiel, but that doesn't mean he's a blind follower. Richard understands the true threat the Saviors pose and he wants to be proactive in defeating them, much like Rick finally decided to do. That led Richard to approach Morgan and Carol in "Hearts Still Beating" to urge them to convince Ezekiel that taking action was the best course. Neither of them wanted to get involved, but that wasn't Richard's last chance to stir up a little opposition. Now that Rick is seeking help and Daryl is staying in the Kingdom, Richard might make a decision that Ezekiel won't like, though it'd be for the greater good.

The fact that Richard has been shown disagreeing with Ezekiel (in private if not in public yet) definitely lays the groundwork for more conflict down the line. Still, there is very little Richard can actually do on his own. He could defect from the Kingdom and join Alexandria's community, but he's only one man and they need a lot more than that. Richard could continue to try and convince Ezekiel to fight, but that could take a while and time is really of the essence here. Richard doesn't have a lot of options.

His best bet is probably to go around Ezekiel, a move that could certainly be construed as betrayal. Richard already did it once when he went to talk to Morgan and Carol; he could continue chatting people up around the Kingdom to test their loyalties and see if they're sympathetic to joining the army. In the next episode, "New Best Friends," Richard is shown talking to Daryl, telling him that they "want the same things" and that he needs Daryl's help. Richard then leads Daryl off, potentially to talk to Carol and maybe even get her on their side.

In The Walking Dead comics, Richard never betrayed Ezekiel, so the comics can't function as a guideline in this instance. The promotional material certainly makes it seem like Richard will take matters into his own hands, but whether or not that constitutes a betrayal depends on how Ezekiel reacts to it. He might come around to Richard's way of thinking, or he might not.