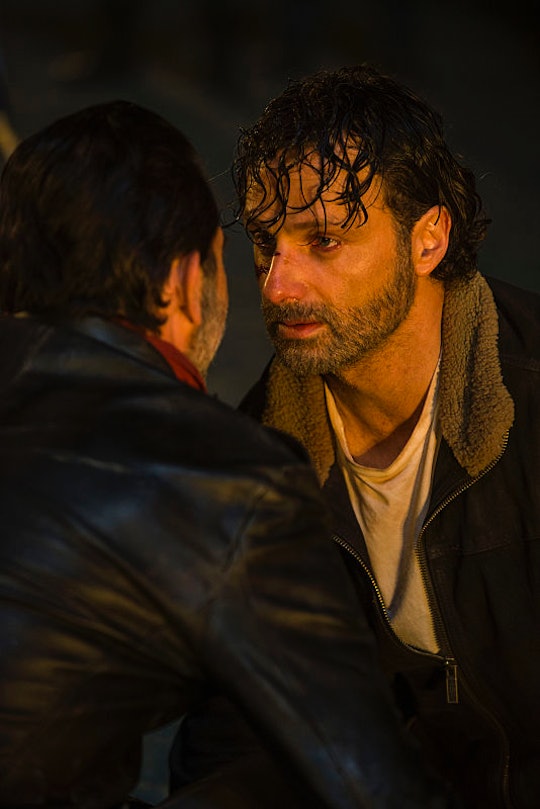 Will Rick Kill Negan On 'The Walking Dead'? Season 7 Will Be All About Revenge

In a sneak peek for the Season 7 premiere of The Walking Dead, viewers get to check in with the show immediately after Negan has violently killed one of Rick's people. The trauma has left Rick visibly shellshocked, but he has it together enough to look Negan in the eye and promise to kill him – not necessarily today or tomorrow, but someday. Knowing Rick as fans have come to, that seems like a promise he'll keep; Rick has never been known to shy away from taking someone out, especially someone as villainous as Negan. But the clip doesn't end there, and it doesn't answer one important question: will Rick kill Negan on The Walking Dead?

The clip certainly wants to make fans believe that the answer will come sooner rather than later. Negan is deeply amused by Rick's bravado, so he takes the weapon Rick arrived with – an ax – and then hauls Rick off by his jacket into the nearby trailer, ostensibly for some kind of fight to the death. But this isn't the first time any of us have watched TV, right? Negan's arrival has been so hyped up for months that there's no way he's going to be dispensed with this early into Season 7 – and it doesn't seem likely that Rick is a goner either, because he's the main character. Negan is also known for doing the unexpected, so maybe he won't even attempt to fight Rick in the trailer; maybe it's all just an elaborate mind game.

But even if Rick doesn't kill Negan in this particular scene, will he actually manage to do someday, like he promised he would?

Rick certainly has the motivation to kill Negan. Even before Negan killed one of Rick's people with a baseball bat, he was a threat that need to be nullified; he's a tyrant, and he's been taking advantage of the local communities while allowing his people to partake in some serious violence. There's no doubt that Rick will do everything in his power to follow through on his threat – or at least he'll try to.

However, despite wanting Negan dead, Rick never actually kills him in the comics. During a throwdown between the various communities in the area, Rick manages to slash Negan's throat, but this doesn't result in his death. Instead Rick captures Negan and keeps him prisoner in a basement for over two years, until Negan is eventually able to escape.

The show has deviated from the comics before, so they may not follow that plot to the letter, but one thing is certain: Negan's journey on the show is only just getting started, so even if Rick does kill him, it won't be any time soon.