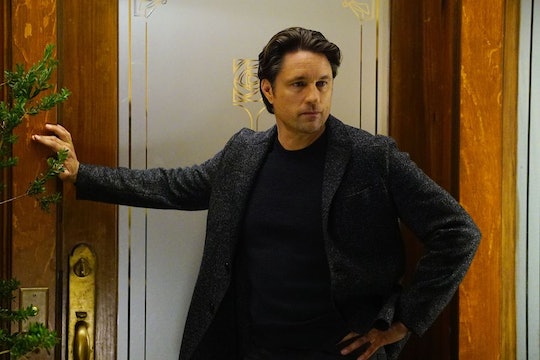 Riggs' Fate Is Up In The Air On 'Grey's Anatomy' — Literally

Thursday night's episode of Grey's Anatomy has fans stressed. Based on the preview, it looks like Meredith may find herself in another plane crash alongside her almost-boyfriend Riggs. While it seems highly unlikely that Shonda Rhimes would have Meredith survive one plane crash just to kill her off in another one, some fans are thinking someone else may end up on the chopping block this Thursday. So will Riggs die on Grey's Anatomy? I really hope that won't turn out to be the case.

The latest episode of Grey's ended with Meredith cancelling her "not a date" with Riggs, to spend the night with Maggie, who was still grieving the loss of her mother. However, after Arizona totally psyched Riggs out talking about the great love that was MerDer, Riggs felt like Meredith was using Maggie's grief as an excuse not to go out with him. Whether or not that was true, by the end of the episode the pair weren't in the best place. Hence why Meredith was obviously not thrilled to discover Riggs was on her flight in the promo for the next episode.

However, the two seem to get over their issues since they end up in the bathroom together. But then their flight starts going through some technical difficulties. It looks like the plane gets caught in a storm and suffers some serious turbulence and someone will need medical attention, but it doesn't look like it's Riggs.

It seems more likely that a passenger on the flight will end up injured and Meredith and Riggs will have to team up to help them. Though Rhimes may give fans a good scare, it seems doubtful that the plane will actually crash. Why put Meredith through that again? And if the plane doesn't crash, Riggs probably won't die. It just seems cruel to give Meredith a new potential love interest just to kill him off too.

Rhimes obviously has no issue killing off her characters when she feels it's necessary, but I have to believe she loves Meredith too much to put her through that. Plus, why build up Riggs and have this storyline go on since the end of Season 12 just for it to end with him dead before their relationship even had a chance to get off the ground?

Instead, this plane situation will probably be an eye opener for Meredith in which she is once again reminded that life is short and she might as well give Riggs a chance while there's still time to give him one.