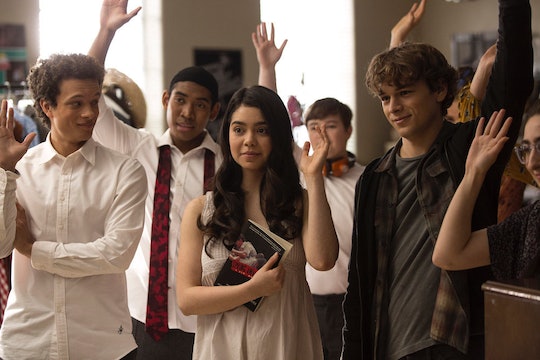 NBC's 'Rise' Is About To Take Its Final Bow

Despite the critical acclaim and big budget, NBC lost its musical drama Smash to low ratings, but decided to give the genre another go this year with the ambitious musical high school drama, Rise. The series, based on Michael Sokolove’s book, Drama High: The Incredible True Story of a Brilliant Teacher, a Struggling Town, and the Magic of Theater, has been struggling with its ratings since the premiere in March, leaving fans questioning its fate. So will Rise return for season 2, or will it follow Smash to the musical drama graveyard?

Unfortunately, it looks like Rise won’t be returning for a second season, and its steadily declining ratings are to blame. Although the show premiered with fairly decent ratings, Variety noted that it’s been continuously losing viewers, which is why NBC has chosen to cancel the series. Even with brilliant showrunners like Jason Katims, the genius behind Friday Night Lights, and Jeffrey Seller, producer of the blockbuster Broadway musical Hamilton, the series wasn’t able to find its footing and hold on to a strong following.

The series follows the story of a dedicated high school drama teacher, played by Josh Radner, and his motivational leadership that inspires his students and colleagues to thrive via the arts. With its ambitious and inclusive character, talented showrunners, and an amazing cast including Rosie Perez and Auliʻi Cravalho, the show was set to break barriers and serve as a reminder of just how crucial it is for schools to keep their arts programs. As honorable as its intentions may have been, unfortunately Rise wasn’t able to successfully stand out in such a crowded and competitive TV landscape.

TV musicals have seen their fair share of failures and successes in the past. FOX’s musical high school comedy Glee started out really strong for the first few seasons, with a significant cult following, millions of iTunes downloads, reality spin-offs, and its own hit movie. But after a change in characters and plotlines, the show’s ratings declined severely, ultimately making the sixth season its last.

Smash, the NBC musical drama that followed two Broadway stars, played by Megan Hilty and Katharine McPhee, and starred huge names like Angelica Houston and Debra Messing, also couldn’t fare through the ratings cycle, despite the amazing music and performances. However, this past March, chairman of NBC Entertainment, Robert Greenblatt told Entertainment Weekly that Smash may end up seeing a reincarnation of some sort in the near future.

With all the new shows and networks popping up, it’s hard for any show to survive in the current TV climate. Even fan favorites with cult followings like The X-Files and Quantico, surprisingly lost viewership this past season, and aren’t scheduled to come back next year, mentioned Esquire. The list of axed shows is long this year, and it looks like TV executives are playing hard ball with all of their programming.

Fans of one of TV’s best, stand-out comedies, Brooklyn Nine-Nine, went through an emotional roller coaster this week when FOX announced its cancellation. After millions of tweets to save the show, including one from Luke Skywalker himself, aka Mark Hamill, CNET noted that the show was surprisingly picked up by NBC, and will live on to fight another season.

If you are a fan of Rise, the good news is that you still have the series finale, which airs on Tuesday, May 15, and you’ll get to finally see their version of Spring Awakening, the performance that the characters and story have been working up to. Hopefully, once available, you’ll be able to rewatch the whole season streaming on NBC, Hulu, or Netflix. You can even relive your favorite inspirational musical moments from the show by downloading the Rise Season 1 soundtrack from iTunes. So at least the series will live on in some form.