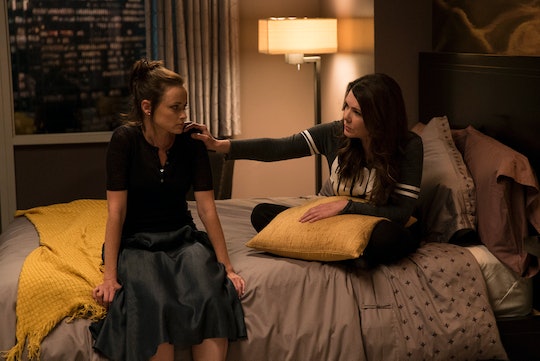 Will Rory Get A 'Gilmore Girls' Spin-Off? The Revival Left Her Story Unfinished

(Warning: This post contains spoilers from Episode 4 of the Gilmore Girls revival.) Odds are that if you're reading this, then you have managed to make your way through the four-episode installment of the Gilmore Girls revival. And if that's the case, then you know what the final four words and the fact that Rory is now pregnant. The shock of it all is probably still running through your system right now, but so are undoubtedly a ton of questions in regards to this whopper of a cliffhanger. Who is the father of Rory's baby? And, perhaps more importantly, will Rory get a Gilmore Girls spin-off series in light of this newfound information?

As of now, both of those questions will have to go unanswered at least for the time being. I'm sure as the days progress, Amy Sherman-Palladino will unveil what her plans for Rory's future may or may not entail, but for now we just have our thoughts and theories to keep us company. You would think that the reveal of the final four words would serve as a source of closure since that's always how Sherman-Palladino had pictured ending the series. But now that we know what those words are, it's hard to believe that she wouldn't have it continue on in some capacity, even in the form of a Rory-centric spin-off.

During an interview with TVLine earlier this month, Sherman-Palladino and her husband shared their thoughts about those closing four words and whether or not it brought them a sense of closure. "You never really get closure in life," they remarked, while also adding that it was the end of the story "for now, at least." That definitely sounds like there could be room for a spin-off if the actors and writers were up to the task. It would probably be too difficult to get everyone back like they did for the revival, but I think a spin-off with significantly less original characters could be very doable.

Otherwise, are we really just expected to be satisfied with that ending, knowing that a new part of Rory's journey has only just begun? And then there's the fact that Lorelai is about to be a grandmother! The mind reels at how this new dynamic would work. Fans will undoubtedly want more after this major reveal, and if the writers left us with a cliffhanger, then they may be prepared to give us more in the very near future.