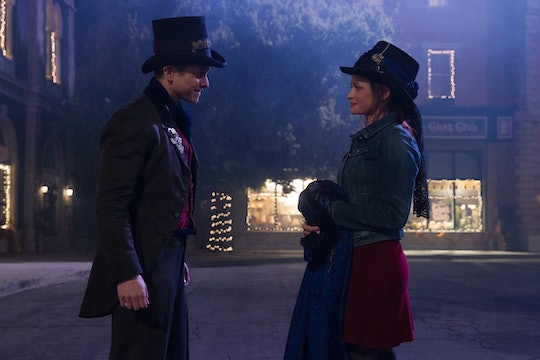 Will Rory Tell Logan She's Pregnant On The 'Gilmore Girls' Revival? She May Not

"I'm pregnant," Rory told her mother at the end of "Fall," the fourth episode of the Gilmore Girls revival. Although everyone was worried about the final four words of the series, it ended up being these last two words that shocked Gilmore Girls fans to their core all around the world. At this point almost everyone can agree Logan is the father of Rory's baby, but would Rory tell Logan she's pregnant on the Gilmore Girls revival? Based on her conversation with Christopher, it seems she may consider keeping this baby a secret, at least for a while as she figures things out.

After her mom gave her the go ahead to finish her book, aptly titled Gilmore Girls, Rory went to pay her father a visit. Although she went under the guise to tell him about the book and Lorelai's impending nuptials, it later became clear that she also had an ulterior motive for visiting her dear ole dad. Rory began asking him about Lorelai's choice to raise Rory on her own and why he didn't fight Lorelai on it and if he ever regretted his decision. Christopher told her that from the moment he saw Lorelai and Rory together he knew they were a team and it would be them against the world. Lorelai wanted to go at it alone and he acknowledged that he didn't put up much of a fight, but that in the end, he felt it was the right decision.

Looking back at that scene now, I feel like Rory seemed to take this to mean that she could raise the baby on her own. But as many fans pointed out, this is a very different situation than what her parents went through. Christopher and Lorelai were only 16 years old when Lorelai got pregnant. Logan and Rory are in their 30s and Logan has no idea that Rory is pregnant. Shouldn't Rory tell Logan about the pregnancy and at least give him the chance to be a father to his child? Despite her conversation with Christopher, it seems doubtful that Rory wouldn't tell Logan about the baby. Maybe it wouldn't be right away, but at some point it seems like she'd want him to know.

Most likely she'd tell him she's pregnant, but also assume him that she doesn't need or want anything from him, and will raise the baby on her own. At least that's what I'd hope Rory does. Granted, it truly is her decision to make, but considering all of the history between them, that seems like a big secret to keep forever. Unfortunately, we may never know for sure how this would've played out, but it's still interesting to think about nonetheless.

More Like This
10 Of The Raddest Movies From The '90s To Watch On Girls Night
Yellowstone Season 5 Officially Has A Premiere Date
Meghan Markle Calls On Men "To Be Vocal" In The Aftermath Of Roe v. Wade Ending
Elmo Talks About Getting His Covid Vaccine In A Cute New Video