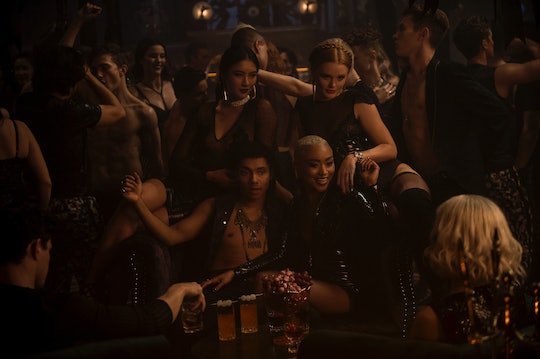 Part 2 Of 'Sabrina' Will Focus Heavily On A Love Triangle

Before Part 1 of The Chilling Adventures of Sabrina was even cold in its grave, fans were ready for Part 2. By the end of the first season Sabrina had broken things off with her sweetie, Harvey, and things appeared to be heating up at the academy with Nick Scratch. But what about Harvey? With all the magic on set, you can't help but wonder if Ros and Harvey get together on Sabrina Part 2. I mean, when it comes to relationships on a witchy drama, so many possibilities, so little time, really.

So, the jury is still out when it comes to whether Harvey and Ros get together for real — and it's not some bewitching by Ms. Wardwell in order to trick Sabrina into severing ties with the mortal world for good. If you saw your boyfriend (Ross Lynch) and best friend (Jaz Sinclair) getting a little too cozy, it would be understandable if you got a little jealous.

If you watched the Part 1 finale, you saw how Sabrina summoned dark magic to save Greendale, she finally came clean about her witch-tastic ways, and Harvey was fully ready to accept her, as is. It was then that Sabrina confessed she didn't think it'd be safe for her to be around him, Ros, or Susie anymore because she loves them too much to risk their safety. Typical high school problems, am I right?

"He finally learned the truth," Lynch told Entertainment Tonight of the iconic relationship. "But because Harvey comes from a long line of witch hunters, he doesn't take to the magic very easily, and that eventually kind of pulls them apart."

Which brings me back to Nick (Gavin Leatherwood), who has made his feelings for Sabrina crystal clear. I smell a full-blown love triangle between Nick, Sabrina, and Harvey on the horizon — which could definitely throw a wrench in that Ros and Harvey ship.

The official Netflix description offerssaid: "Magic and mischief collide as half-human, half-witch Sabrina navigates between two worlds: mortal teen life and her family's legacy, the Church of Night." I'd say there's a heavy focus on the mischief part when it comes to romance. With Nick vying for Sabrina's affection a little harder in Part 2, Harvey could turn to Ros more. Though fans don't think there's been enough chemistry beyond friendship to get them to the same romantic level as "Harbrina."

Yes, it's true — the coal miner's son and the outspoken minister's daughter could become a thing, but IMHO, I'd count on it only happening if Harvey grows tired of the triangle, or if Ros' feelings develop.

The bad news is, I'm not a fortune teller when it comes to who's going to get together on Sabrina Part 2. The good news is the answers you're looking for are on the way.

Oh, and did I mention the show has already been picked up for two more seasons? Rest assured — if Ros and Harvey end up together, they have plenty of time to develop the relationship organically.