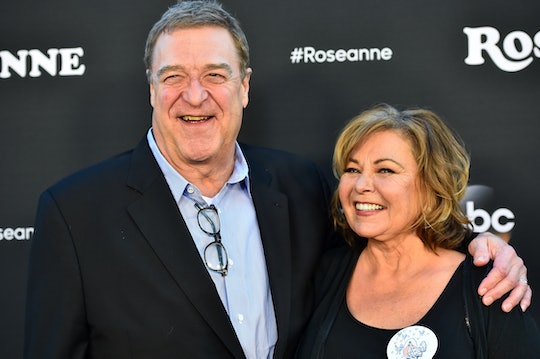 The 'Roseanne' Spinoff Will Be Missing One Major Person

The Roseanne revival isn't the end of the road for the Conners family. Three weeks after the revival was canceled due to a racist tweet made by Roseanne Barr, who played the show's titular character, ABC has decided to go ahead with a spinoff currently being called, The Conners. Although the new series has clearly distanced itself from Barr, dropping her name from the title, people still can't help but wonder will Roseanne be on The Conners?

The matriarch of the Conner family will no longer be a part of the show. According to Deadline, ABC was adamant that they would only go ahead with a spinoff if Barr had absolutely no involvement, either creatively or financially, in the new series. Barr and the series' producer, Tom Werner, were able to come together for a settlement that has ensured just that.

"I regret the circumstances that have caused me to be removed from Roseanne," Barr said in a statement. "I agree to the settlement in order that 200 jobs of beloved cast and crew could be saved and I wish the best for everyone involved." Werner also added in a statement, "We are grateful to have reached this agreement to keep our team working as we continue to explore stories of the Conner family."

The Conners will feature everyone besides Barr from the revival, including John Goodman (“Dan”), Laurie Metcalf (“Jackie”), Sara Gilbert (“Darlene”), Lecy Goranson (“Becky”) and Michael Fishman (“D.J.”). In place of their two-year deals for Roseanne, Deadline reports the actors have signed one-year contracts for the spinoff, keeping them at the same salaries, which are reportedly around $300,000 an episode. The writing-producing team that had been in place for Season 2 of the Roseanne revival will also stay on for The Conners, along with the crew.

It hasn't yet been revealed how exactly Roseanne will be written off the show, but the synopsis of the new series seems to hint that she will be killed off. It reads:

"After a sudden turn of events, the Conners are forced to face the daily struggles of life in Lanford in a way they never have before. This iconic family -- Dan, Jackie, Darlene, Becky and D.J. -- grapples with parenthood, dating, an unexpected pregnancy, financial pressures, aging and in-laws in working-class America. Through it all, the fights, the coupon cutting, the hand-me-downs, the breakdowns -- with love, humor and perseverance, the family prevails."

Fans have already begun to theorize what could lead to Roseanne's death. Many have suggested that she'll get the knee surgery that was mentioned in the first season of the survival, but some complication will lead to her dying in surgery. Others have also mentioned the possibility of Roseanne overdosing on opioids, since she admitted to being addicted to pain killers in the revival. No matter how she's written off, it's abundantly clear that she won't be back for this new spinoff, which has garnered mixed reactions.

Some fans have taken to Twitter denouncing the spinoff, saying that it's basically Roseanne without Roseanne and it won't be the same so they won't be watching. On the flip side, others say they won't be tuning in because the cast still worked with Barr despite controversial statements she made before the revival began. Still, there are many fans who are excited for the spinoff and are happy to see the series continue on in this way.

Though there hasn't been a rallying of support behind the new series, The Conners will most likely still do well. Roseanne was the high rated TV series last season, and even though Barr will no longer be a part of it, fans will probably still tune in. You can find out what's next in store for the Conners when the spinoff series premieres this fall on ABC.