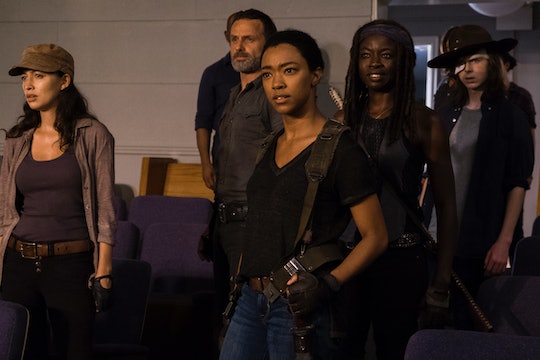 Rosita & Sasha Have A Plan On 'The Walking Dead'

Rosita and Sasha haven't always gotten along on The Walking Dead, particularly because of the messy triangle they were in with Abraham and then his subsequent death. However, after "Say Yes," their relationship just might change. Rosita had been ready to take out Negan for weeks even if she failed the moment she got her chance; after Rick and Michonne discovered an impressive amount of guns to add to their stockpile, Rosita saw an opportunity to seize a second chance. And instead of taking the mission on alone, she decided to approach Sasha. The two women were forming a plan together, but will it be successful? Will Rosita and Sasha kill Negan on The Walking Dead?

When Rosita showed up at Hilltop with a gun in tow, Sasha's only condition was that she wanted to be the one to take the shot. If Rosita let her do that, then it was a official: they could be a team. Rosita obviously wanted Negan dead more than she wanted to be the one to do it, so she agreed. Both of them are clearly dedicated to putting an end to Negan's reign, even if it means they don't make it out alive, but the odds of them being successful are slim for more than a few reasons.

There was one ironclad reason why Rosita and Sasha won't be successful: Negan won't be going anywhere anytime soon. His death may be deeply desired by the other characters (and by more than a few fans) but if it ever happens, it won't be this season. Jeffrey Dean Morgan already signed on for Season 8 of The Walking Dead, so Negan will be around to lean back and joke threateningly for another year at least. Negan is also still alive in the current run of the comics, so he's definitely going to survive.

With Negan's fate assured, the question becomes whether Rosita and Sasha will end Season 7 alive. In "Say Yes," Rick gave Michonne a speech where he explicitly stated that they would lose people in the battle against the Saviors, and they could lose a lot of people. On a show that has always featured more than its fair share of character death (an understatement in the extreme), it's a guarantee that some beloved characters will bite the dust in a major battle. The fact that Rosita and Sasha are putting themselves directly in the line of fire could mean bad things for them.

Rosita and Sasha almost definitely won't succeed in completing their Negan kill mission, but just how badly they'll fare in the process is anyone's guess. They could escape by the skin of their teeth, but they could also just as easily lose their lives.