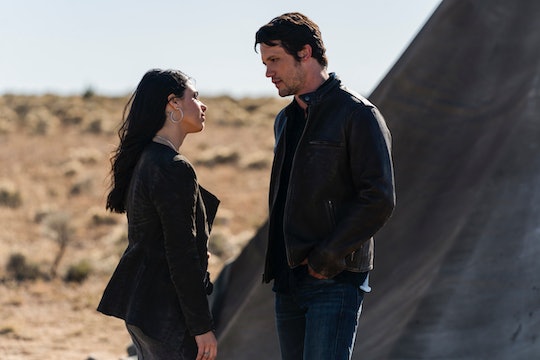 If You're Dying To Watch Season 1 Of 'Roswell, New Mexico' You're In Luck

Believe it or not, Season 1 of Roswell, New Mexico has come to an end, and whether you’re in the mood to rewatch the series, or plan on watching it for the first time, you may be looking for a a way to stream the entire first season. After seeing how many CW shows are available on Netflix, you might be wondering: will Roswell, New Mexico be on Netflix too? And if so, when?

The good news is that the sci-fi series is coming to Netflix, and you’ll be able to add it your watchlist really soon. Earlier this month, showrunner Carina Adly MacKenzie tweeted that Season 1 of Roswell, New Mexico will hit Netflix on May 1. This isn’t a complete surprise because, according to Variety, back in 2016, The CW struck a deal with Netflix, and agreed to drop entire seasons of its series just eight days after they wrap up. With the Roswell, New Mexico season finale airing on Apr. 23, it makes sense that the 13-episode first season comes to Netflix a week later, on May 1.

As a reboot, Roswell, New Mexico came with a fair share of scrutiny early on, but eventually managed to forge its own special place amongst fans. It’s based on a series of books called Roswell High, that inspired a hit TV series in the ‘90s called Roswell. But the new show takes a refreshing turn from both, and pairs timely elements like healthcare, immigration, and same-sex relationships with its underlying alien conspiracy storyline.

In an interview with The Hollywood Reporter, MacKenzie explained how she wanted to tackle these issues with the reboot, rather than recycle the older versions of the story. “The real-world bigotry is something I fought for, because sci-fi is always a big metaphor for something, and I wanted to make sure that we were still honoring the reality of 2018,” she told the outlet. “Because this is a reimagining of a 20-year-old property, I wanted to make sure there was a reason to retell the story.”

MacKenzie added that she wanted to include an LGBT story that wasn't a typical trope on gay and bisexual relationships. “I think there's a real lack of bisexual representation on TV, and I want to make sure that my show fills a gap that I'm seeing,” she explained. “It also felt like a good opportunity to explore having a gay relationship in a part of the country that's not New York or L.A. A part of the country where you're still facing very real and very loud hatred.”

If you haven’t seen the first season, you might be wondering what the show is about. Without giving away any spoilers, I can tell you that the series is centered around Roswell native Liz Ortecho (Jeanine Mason), a biomedical researcher who left behind her hometown after the death of her sister, Rosa. When the government cuts funding to her current project, Liz is forced to move back to Roswell to live with her father.

Now that she’s back home, Liz reconnects with her teenage crush, Max Evans (Nathan Dean Parsons), and the two share an immediate chemistry. But soon, Liz discovers that Max, his sister Isobel (Lily Cowles), and his best friend Michael (Michael Vlamis) are all alien beings with powers they’ve been hiding from the world. While Liz navigates her new found romance and investigates the mysterious circumstances surrounding Rosa’s death, a decades-old government conspiracy threatens to expose and endanger Max, his family, and all the people around him.

So, if you’re ready to dive into the alien conspiracy on Roswell, New Mexico, don’t forget to add the series to your Netflix queue on May 1.