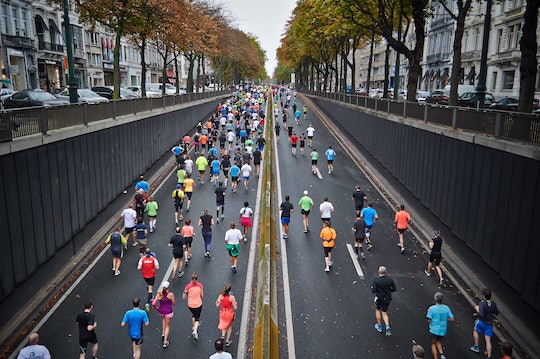 Is a dedicated runner going to let something as simple as a pregnancy get in her way? Heck, no. You will probably see a pregnant lady at almost any 5K, and chances are she’s passing more than a few runners on her quest to the finish line. But will running start labor? Because if so, I know a few race directors who would be pretty freaked out by that possibility.

There is a precedent for race-day babies, too. In 2011, Amber Miller gave birth seven hours after finishing the Bank of America Chicago Marathon, as Today reported, and she claimed the running was possibly what triggered her daughter to arrive early. But even if you don’t want to bang out 26.2 miles while nine months pregnant, it's natural to wonder whether a quick jog around the block is safe.

The answer, as with so many health topics, is: it depends. According to the American College of Obstetricians and Gynecologists, if you were a runner before your pregnancy, it’s safe to continue running during your pregnancy. Of course, because all athletes are different, you may want to work with your doctor to develop a pregnancy-safe training plan. But as far as kick-starting labor (whether intentionally or accidentally) with a run?

As explained in a quick literature review in Scientific American, there does not seem to be evidence that supports any form of exercise as a way to induce labor. Anecdotal evidence that seems to support this idea may be difficult prove: did the running induce labor, or did the woman just happen to go into labor while running? Causation is a tricky factor in this instance. So overall, if you need a run to calm your nerves before facing childbirth (i.e. the most intense marathon of all), feel free to lace up those shoes once more. Because the next time you hit the pavement, you will probably have a brand-new running buddy in tow.