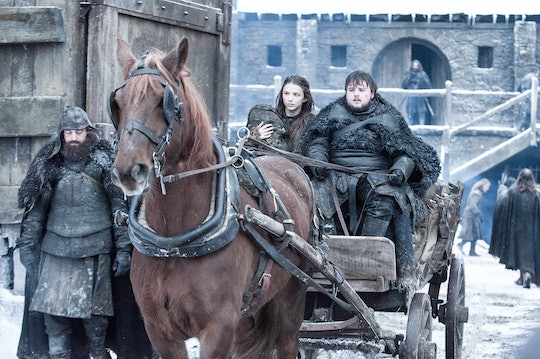 Will Sam Tell Jon Snow About His Parents' Marriage On 'Game Of Thrones'?

In Game of Thrones' "Eastwatch," Gilly revealed something hugely important about Jon Snow's parents: that they were married, making him legitimate and a potential heir to the Iron Throne. Though Sam appeared not to take in the information at the time, there's a chance he could pass on the news. So will Sam tell Jon Snow about his parents' marriage on Game of Thrones?

Sam was always quick to divulge anything pertinent he learned to his good friend Jon, and he would certainly share the knowledge of Jon's parents' marriage with him — if Sam knew that Prince Rhaegar was Jon's father. As far as anyone knows, Jon is the bastard son of Ned Stark; neither Sam nor Jon himself is privy to the truth. The only one who holds all the information is Bran, and so far he isn't telling. All the pieces are there, but as yet one has put the puzzle together.

The details Gilly happened upon were also very sparse. She was reading aloud from the High Septon Maynard's notes and stumbled across something about him annulling the marriage of Prince Rhaegar and marrying him off to someone else in a secret ceremony. She didn't mention that Rhaegar was a Targaryen, or who he married. While the former would be common knowledge, the latter is the most important part. If she had said the name "Lyanna Stark," then Sam would have been a lot more likely to pass on the family history to Jon. As it stands, he has no idea that this has anything to do with Jon.

At the end of "Eastwatch," Sam decided to leave the Citadel, fed up with the menial tasks assigned to him and his own lack of involvement in the coming war. While it's all well and good for Sam to decide to play hero, this has an unfortunately side effect: without all those books to pour over, he could miss out on other major reveals that might prove useful down the road. Perhaps the Septon had even more to say about Rhaegar's marriage, but now audiences will never know.

However, Gilly's discovery could still accomplish something in the future. Once Bran tells Jon what he knows, Jon will need proof to confirm it. "I heard it from my brother, who is a tree wizard" probably isn't going to fly with Daenerys and company when it comes to proving his lineage. If he and Sam and Gilly join forces once again, then she can back him up with what she read.

There's still time for all the pieces to click into place.