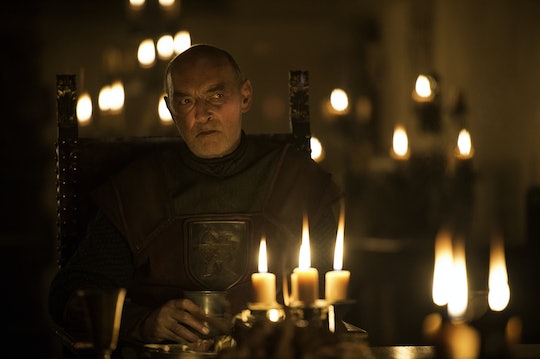 Will Sam's Father Kill Gilly On 'Game Of Thrones'? It's Not As Farfetched As It Seems

The Season 6 Game of Thrones episode "Blood of My Blood" gave Samwell Tarly a clutch weapon in fighting the invasion of White Walkers to come: his father Randyll Tarly's Valyrian steel sword named Heartsbane. But getting that sword came at a price. Now that his father has met Sam's family, he knows that Sam is married to a wildling. Sam did his best to keep Gilly from spilling the beans but she let it slip by accident and Randyll finds out anyway. Lord Tarly hates wildlings, but will Sam's father kill Gilly on Game of Thrones?

It seems like a huge reaction, but remember that Lord Tarly sent Sam off to Castle Black to join The Night's Watch by threatening to kill him in a "hunting accident" if he didn't go. That's how desperately he wanted his second son to inherit his seat instead of Sam. (If Sam is a member of The Night's Watch, he cannot also become Lord Tarly's heir.) So he definitely has murderous impulses.

And he unleashed a horrific tirade against Gilly at dinner when he found out where she really came from. "The Seven Kingdoms have waged war against these savages for centuries and here I sit hosting one in my hall, thanks to my son," he says, referring to her as "it" and "that." Sam's initial plan was to leave Gilly and Little Sam behind at Horn Hill while he goes to the Citadel to become a maester. But after his father finds out he's fathered a wildling bastard, Lord Tarly declares that Gilly will work in the kitchens while the child is raised in the house, and banishes Sam from ever returning.

Sam almost submits to this plan, but at the last minute, he changes his mind, grabs Gilly, Little Sam, and Heartsbane, and absconds with them in the middle of the night. So Gilly is definitely out of the immediate danger of having a mysterious "cooking accident" that results in her death. But it's possible Randyll might come after Sam and his family to get Heartsbane back. He seems plenty motivated to kill Gilly for the fact that she is a wildling alone, but now that Sam has stolen such a prized possession, he might kill her just to punish Sam. One thing is for sure: not leaving Gilly alone at Horn Hill was the right move.