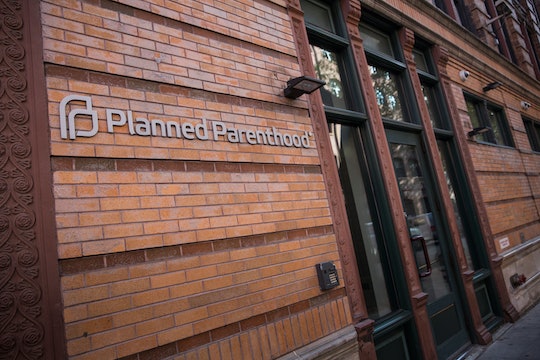 Will Sandra Merritt and David Daleidan Go To Jail? The Anti-Abortion Activists Face Up To 20 Years

On Monday, a Texas grand jury indicted two anti-abortion activists for allegedly faking documents to illegally record meetings at Planned Parenthood. For making and using the fake identification to get into Planned Parenthood meetings, Sandra Merritt and David Daleiden could go to jail for up to 20years, The New York Times reported. Daleiden faces up to a year in prison for a Class A misdemeanor related to the purchase and sale of human organs, according to the Houston Chronicle. Romper reached out to Daleidan and Merritt's attorney's on Wednesday afternoon, but a request for comment was not immediately returned.

Peter Breen, one of Daleidan's lawyers, told Bloomberg News that his team feels they have a strong case. "We have very strong defenses and neither of these two laws fit what David Daleiden and his undercover team did," Breen said. "That procurement statute requires intent, and everyone in the country knows David Daleiden had no intention to buy baby body parts," he added in his statement.

It looks like the case will come down to Daleiden and Merritt trying to prove that they are protected under the First Amendment. On Monday, Daleiden issued an official statement on behalf of himself and his organization, The Center for Medical Progress (CMP), where Merritt was also an employee. The CMP posted their statement shortly after the grand jury's ruling was returned on Monday:

The Center for Medical Progress uses the same undercover techniques that investigative journalists have used for decades in exercising our First Amendment rights to freedom of speech and of the press, and follows all applicable laws.

Both sides seem ready to stand their ground. Planned Parenthood spokesperson Eric Ferrero said that the CMP employees "broke the law to spread malicious lies about Planned Parenthood in order to advance their extreme anti-abortion political agenda,” according to The Washington Post.

Meanwhile, Planned Parenthood has also filed suit against Daleiden and the Center for Medical Progress last month in San Francisco. The suit alleges that the defendants set up fake company and used fake identification to get into private meetings, according to CNN.

It's probably unlikely that the two activists will serve the full 20 years in jail if found guilty, but Monday's indictments alone could mean a big change in public sentiment towards the organization, which continues to provide vital healthcare services to women.