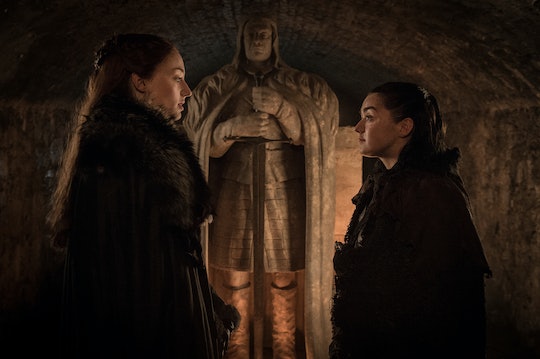 People Are Questioning Sansa's Plans On 'Game Of Thrones'

The one character whose true objectives have been cloaked in mystery all season long is Sansa Stark, who has been ruling The North aptly in Jon Snow's absence. But will Sansa betray Jon Snow on Game of Thrones? Arya might be onto her real desires. The sibling discord between them is just as strong as when they were little girls — Arya believes Sansa is fake and haughty, and Sansa is pretty disturbed by Arya's ruffian-princess-turned-assassin transformation. So when Arya confronts her with a theory that Sansa secretly doesn't want Jon Snow to come back from his sojourn to Dragonstone (where he's been mining dragonglass for weapons to fight the army of the dead), Sansa bristles.

But Sophie Turner herself teased that Sansa's relationship with Jon is strained this season while he rises to power as King of the North and she's relegated to second-in-command/interim Queen. She revealed in an interview with Variety:

"She’s of course happy for him. He’s family. But there’s a certain level where she doesn’t feel like she’s been recognized for the fact that she effectively saved everyone’s asses and kind of saved the day in the Battle of the Bastards. So there’s a certain frustration there. And of course I think she knows that now they’re going to be working together a lot better, because after giving her that kill of Ramsey, he’s kind of shown that he appreciates her and will listen to her a lot more, but there is a little bit of frustration and hurt there — hurt that he didn’t say anything or hail her as Queen of the North."

Which like, on the one hand, now is not the time, Sansa. Jon is a great king, he's loved and respected, he is, as far as anyone knows, the eldest living son of Ned Stark, and he has the most experience and know-how in fighting White Walkers. Yes, she saved the day in a myriad of ways and deserves some agency after her years of terror. But maybe after the frozen zombie element has been neutralized?

In truth, I don't think Sansa would actively, intentionally sabotage Jon in any way. She's just lost too much family, and I can't see her giving up another sibling on purpose. But on the other hand, maybe she's been through too much alone to give much credence to familial warmth anymore. What's one more dead sibling at this point, right? Her homeland and its people have always seemed to be the thing that brought her the most comfort. Maybe she really will do anything to rule them in peace.