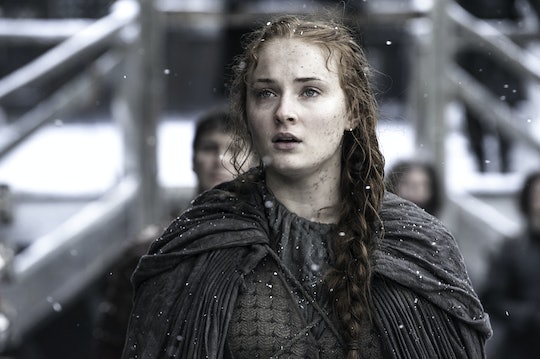 Will Sansa Kill Ramsay On 'Game Of Thrones'? It's Time She Finally Got Her Revenge

In the fourth episode of Game of Thrones' sixth season viewers finally saw a Stark reunion. Sansa, along with Brienne and Podrick, made their way to the Wall, just as Jon Snow was packing his things to leave. Thankfully, this time around, each Stark was in the right place at the right time and they didn't miss each other. Instead, Sansa and Jon both ran to each other after they got past their shock and shared a hug that fans will probably be watching again and again until the next episode.

Once reunited with her brother Sansa was ready to make plans. Although Jon was ready to pack up his stuff and never fight in another war again, Sansa had other ideas. "There's only one place we can go," Sansa told him. "Home."

Sansa is ready and willing to take back Winterfell from the Boltons. After everything Ramsay did to her that's not at all surprising. She asked Jon about asking the Wildlings to help fight for them but Jon didn't want to. He was done fighting and after being murdered by his own people, who could blame him? Still, Sansa wasn't backing down and told him that she was going to take back Winterfell with or without his help.

However, after Ramsay sent a particularly disturbing letter to Jon, telling Jon that Ramsay has Rickon and that he knows Sansa is at the Wall, Jon began to reconsider his stance on taking back Winterfell. With one final push from Sansa, Jon finally agrees they have to fight for Winterfell.

Even though Jon is (was?) Lord Commander, it's clear Sansa's really in charge here so it wouldn't be surprising at all if she was the one to give the killing blow to Ramsay. After everything Ramsay did to her and what the Boltons as a whole did to her family, Sansa deserves to be the one to kill him. Plus, it'd be satisfying to finally see Sansa get her revenge on at least one of the people that has hurt her over the years.

Sansa has grown a lot throughout the seasons and seeing her step up in Sunday night's episode of Game of Thrones, proved she's ready to not only take back Winterfell but to rule it.