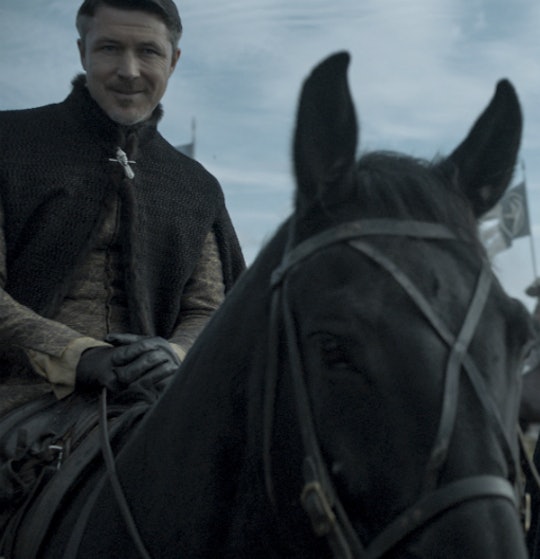 Will Sansa Learn The Truth About Littlefinger On 'Game Of Thrones'? It Could Change Things

The "Battle of the Bastards" has been won, all thanks to Sansa, Littlefinger, and the Knights of the Vale, all of whom came through just in the nick of time. From the moment Littlefinger appeared on Game of Thrones, he's been a sketchy character, but at least in this battle he was actually on the right side of things. However, in the past Littlefinger has definitely been on the wrong side of things, namely helping the Lannisters and betraying Ned's trust back in King's Landing. It was Littlefinger's betrayal that led to Ned's death and the real question now is will Sansa find out the truth about what Littlefinger did?

Littlefinger's crimes are two fold. For one he convinced Catelyn's sister, Lyssa Arryn, to kill her husband Jon Arryn and blame it on the Lannisters. Because of this, Ned became the Hand of the King to investigate the Lannisters and it is then that he discovers Jon Arryn was investigating who Joffrey's real father was because he didn't believe it was Robert Baratheon. This led Ned to plan a coup, which Littlefinger told the Lannisters about, leading to Ned being executed.

Sansa has since then blamed herself for her father's death, believing it was because she tattled on Ned to Cersei, which led to Ned's death. She's carried the weight of this guilt for years, and Littlefinger has held the truth for so long that when Sansa learns of it, there's no doubt she will be angry. Which is why Littlefinger, if he's smart, won't ever tell her. Littlefinger knows what he did was wrong but he's just made his way back into Sansa's good graces. There's no way he's going to spill those beans now.

It's possible Jon knows the truth about Littlefinger, and if he does he'll definitely tell Sansa. But the odds of Jon knowing the truth are slim. It's clear he doesn't like Littlefinger, but most people don't because he's so shady. How could Jon possible discover what Littlefinger did when he was nowhere near King's Landing at the time and has been pretty out of the loop about what was happening in Westeros for years. Plus it would seem odd for Jon to make this discovery offscreen, which means it probably didn't happen.

Another possible way Sansa could discover the truth is if Robin Arryn, who looks to Littlefinger for everything, knows the truth and tells Sansa. It's possible during Littlefinger's time as Lyssa's husband and a kind of mentor to Robin, he let it slip about all his dealings in King's Landing. With the Knights of the Vale now in Winterfell it wouldn't be surprising for Robin to show up there too and accidentally spill Littlefinger's secrets.

Still, the odds of Sansa learning the truth about Littlefinger are very small. He's been able to keep this secret from her for so long there's no doubt he'll continue to keep it under wraps for the rest of their days.