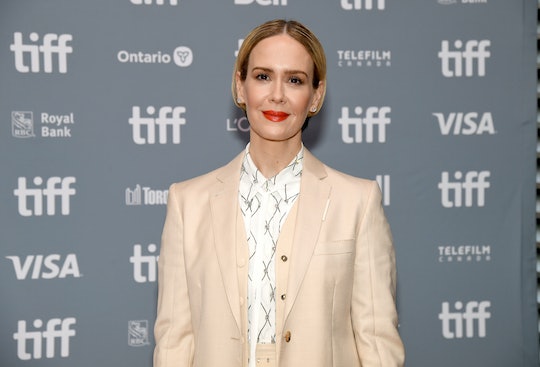 Sarah Paulson Might Not Visit Camp Redwood On 'AHS: 1984'

Sarah Paulson has never missed a season of American Horror Story, even when she had to pull double duty to appear on other shows and movies at the same time. But there's a first time for everything, because it doesn't look like Sarah Paulson will be on AHS: 1984 when it premieres on FX on Sept. 18. If she does show up, it will be in a limited capacity.

Paulson's screen time on the show has varied over the years; she went from a guest spot in Season 1 to a starring role in Season 2, and she's been fairly prominent in every season since then. Ahead of 1984's premiere, Variety reported that Paulson would not have a "significant role" in the season, but she could always pop up for a cameo. Deadline confirmed that Paulson would have a reduced role in Season 9, but didn't share further information on what that role would be. Hopefully fans won't have to go an entire season without a glimpse of AHS's regular leading lady, even if she's only able to appear for a scene or two.

It seems like the reason Paulson had to scale back on AHS is because she has a pretty stacked schedule. She'll be appearing in the shows Mrs. America and Ratched, as well as the upcoming season of American Crime Story. On top of that, she had roles in the films Run, The Goldfinch, and Abominable. Paulson has been busy, which may be why she had to take a tiny break from AHS.

When Syfy asked Paulson about the possibility of her taking part in 1984, she didn't have much information to share. In fact, she didn't really have an answer at all. "All I can say is I know the least about this season upcoming than I've known about any season," she said. Though she usually had more information by that point in the process, she didn't have much and therefore couldn't offer any news about her potential role. She was also fairly preoccupied with her other projects, adding, "I'm so busy with Ratched, it's hard for me to think about anything beyond that."

Paulson may have been too tied up to visit Camp Redwood for long, but there's no indication that she's leaving the show forever. She told Syfy that she was considering directing another episode of American Horror Story in the future after helming Season 8's "Return to Murder House." And she's spoken in the past about her fondness for the series, telling Vanity Fair in 2013, "But it's just the best job. I swear, if I could do American Horror Story: Season 940, Vampires in Space, I would totally be there."

Paulson won't have the starring role when AHS returns for its ninth season, a slasher homage set in the 1980s. But she may return in future seasons to dominate the screen once again. Personally, I'm hoping she gets to make that Vampires in Space idea a reality, because that's something I'd certainly be down to watch.