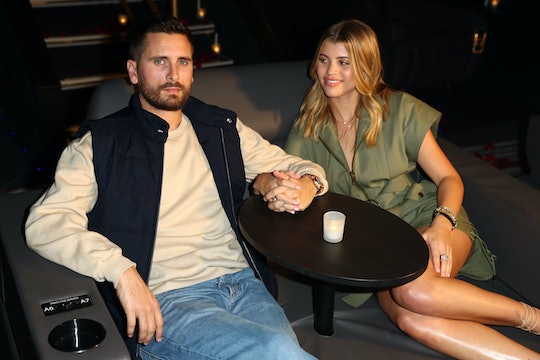 Will Scott Disick & Sofia Richie Be On 'KUWTK'? They've Been Dating For 2 Years

The new season of Keeping Up with the Kardashians is officially underway, and one thing's for sure: Fans can expect as much drama as ever. Between Khloé's relationship problems, Kim announcing a pregnancy, and the usual sibling bickering, keeping up with this family is no easy feat. (Thus the reality TV series' fitting title.) In fact, plenty of viewers have likely wondered: Will Scott Disick and Sofia Richie be on KUWTK? The pair has been dating for a while now, after all.

One simple line from this season's trailer is probably what had fans initially thinking that Richie could be making an appearance. "I didn't think I was going to have happiness again," Disick can be heard saying during a Season 16 trailer, which was released at the end of March. Disick and Kourtney Kardashian had an on-again-off-again relationship for years until they finally called it quits for good in July 2015. Since then, he has remained close with his ex and her family — and has kept appearing on their reality show. It was in May 2017 that Disick and Sofia Richie were first spotted together, according to Cosmopolitan. Which means they've been together for nearly two years at this point.

KUWTK has addressed Disick's relationship with Richie in the past — just not directly. During a February 2018 episode, Disick didn't seem too interested in talking about his love life with former mother-in-law, Kris Jenner. “For me, to see that Kris is invested in my life means the world to me. Because she’s got so many other kids and so many other things going on, so the fact that she actually worries, loves and cares about me is probably one of the best feelings I have,” he said, according to People. “Truthfully, as much as I’d like to be honest with her and tell her how I’m how I’m really feeling, I also do want to respect Kourtney and her feelings. Maybe down the line, but right now, my biggest thing is just being respectful of everybody.”

As dedicated fans already know, Season 16 of KUWTK aired on Sunday, March 31 — and although Sofia Richie didn't make an appearance, Scott Disick definitely did. But what are the odds that Richie might show up on a future episode KUWTK? It turns out, Disick's 20-year-old girlfriend has already answered this question directly. "Not that I’m against it, [but] I’m just very private,” she told Us Weekly in February. Disick seemed supportive of his girlfriend's wishes at the time. “Everyone has their own choices and nobody should have to do anything they don’t want to do… it’s her choice," he told Us Weekly.

I mean, it makes sense if you think about it. Appearing on the family show of her boyfriend's ex? Awkward. Then again, Richie has gone on a family vacations with Kourtney, Scott, and their kids in the past. (They all traveled to Mexico together this past December, according to E! Online.) The trio has also gone out to dinner together. So anything's possible.

Who knows? Maybe eventually, Sofia Richie will have a change of heart and wind up on the show. But for Season 16 of KUWTK at least, it's probably safe to say: I wouldn't hold your breath.