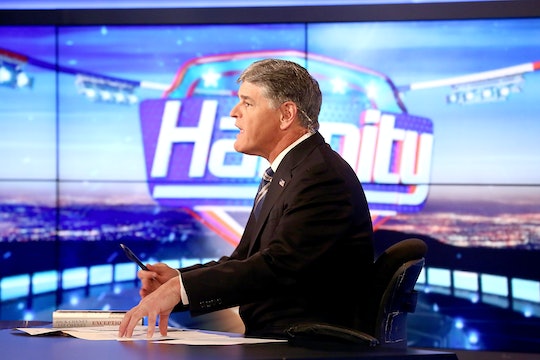 Will Sean Hannity Be At The Final Presidential Debate? He's A High Profile Trump Supporter

It’s been a difficult couple of weeks for Donald Trump’s political campaign. Since the leak of the disturbing “Trump Tapes,” politicians and civilians alike have been publicly withdrawing their support for the Republican presidential nominee. For those of us who have been staunchly opposed to Trump’s racist, sexist, xenophobic rhetoric from the onset of his campaign, it almost feels as though these retractions are too little, too late. There are many things Trump is incapable of doing, one example being his inability to understand consent and sexual assault, but it is undeniable that he has been able to build a loyal and dedicated following over the past year, regardless. And while politicians like John McCain may not be voting for Trump anymore, there are still many high profile American citizens who plan on checking off the reality star’s name on the ballot next month. One of Trump’s most dedicated supporters has been Sean Hannity, a conservative political commentator and host of The Sean Hannity Show on Fox. As the third debate inches closer and closer, some have begun to wonder if Hannity will be at the final presidential debate too, in order to cover his favored candidate's efforts in person.

Trump was scheduled to make an appearance on The Sean Hannity Show on Thursday night, however, he cancelled at the last minute. In the wake of “Trump Tapes,” CNN notes, some newscasts have had major difficulties booking Trump representatives on their programs. The Trump campaign cancelling on Hannity truly demonstrates how tight lipped they are being during this time, as Trump and Hannity have remained very close throughout the campaign. (Hannity has been one of Trump’s most vocal supporters, even appearing in one of his campaign ads.)

Hannity has also not shied away from continuing to loudly support Trump since the leaked Access Hollywood audio tapes and as multiple women have come forward accusing the candidate of sexual assault. Despite Trump cancelling on him last Thursday, Hannity powered through with his episode, even hosting the three women who have accused Bill Clinton of sexual assault, whom Trump has also been bustling around like a get out of jail free card, rather than the Republican nominee himself. The Daily Beast described this interview as Hannity throwing “a Hail Mary for Donald Trump.”

Still, despite Hannity's best efforts, Trump’s absence from Hannity’s show did not go unnoticed. It was unclear what had prompted the cancellation (although it's a safe bet there's no bad blood between the two, given Hannity's own Twitter timeline). His cancellation immediately had many speculating that he may pull out of the third and final presidential debate as well. Jennifer Rubin, a conservative columnist for the Washington Post, has speculated that she doesn’t “think we will get a third debate," since Trump's legal team "would have to advise him to take the 5th.”

In the meantime, at a rally in Lakeland, Florida, Trump once again spoke to his supporters about how he may skip the final debate, and how he believed both the elections and debates were being rigged by the media — though he wasn't clear about whether Hannity himself should be counted among that same American press.

There has been no formal statement from Trump’s campaign about whether or not the Republican nominee will, indeed, participate in the debate. But whatever the case, it's likely that Hannity — even if he doesn't cover the event in person — will be tuning in himself, if only to prove his loyalty and place as one of the few standouts in the media world who still support Trump.