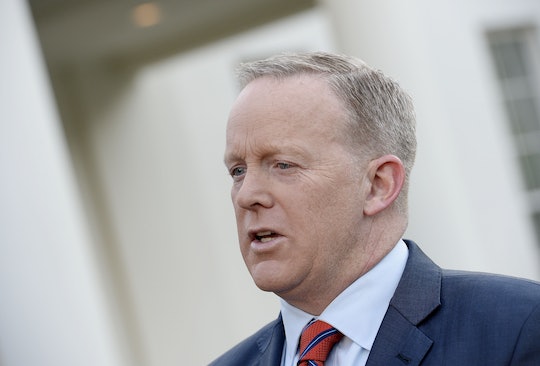 Will Sean Spicer Be Fired?

If you had bad day at work today, in any industry, take heart — it can't possibly be worse than the day that White House Press Secretary Sean Spicer is having. Seriously. Ever since Spicer took on the press secretary job under President Donald Trump, he's been the butt of a lot of jokes. Melissa McCarthy even dolled herself up to play "Spicey" on Saturday Night Live, mocking the way that he used "alternative facts" to speak to and bully the media. That joke might have been funny to some viewers — a man fumbling in front of the media is always funny to some viewers. But on Tuesday, the press secretary fumbled so hard that it's worth wondering if Sean Spicer will be fired or not.

Here's the thing: This time, Spicer's fumble wasn't political at all. He just showed that he wasn't capable of being a good press secretary. In the past, the media has made a joke of Sean Spicer because he's deflected some serious questions — arguably doing his job. On Tuesday, he showed that he just doesn't understand history. Or anything.

Spicer showed himself to be either ignorant of history or that he didn't fully comprehend the gravity of what he was implying. He said, during Tuesday's White House press briefing:

We didn’t use chemical weapons in World War II. You know, you had someone as despicable as Hitler who didn’t even sink to using chemical weapons.... I think when you come to sarin gas, he was not using the gas on his own people the same way that Assad is doing.

The fact that Spicer doesn't understand that Hitler also used gas, in a nastier, localized way to exterminate Jews (or anyone else his regime didn't really like) should be enough to ruin a career. Yet Spicer was allowed to explain his ignorance and walk back his original statements. He dug his heels in about comparing Hitler and Syria's Assad.

I mean, there was clearly, I understand your point, thank you. Thank you, I appreciate that. There was not in the, he brought them into the Holocaust center, I understand that. What I am saying in the way that Assad used them, where he went into towns, dropped them down to innocent, into the middle of towns, it was brought — so the use of it. And I appreciate the clarification there. That was not the intent.

In all of that briefing, Spicer mispronounced the Syrian president's name, Bashar al-Assad, at least two times, though it's unclear if those were slip-ups or just Spicer getting tongue-tied.

President Donald Trump has made no statement about Sean Spicer or his comments on Tuesday, so it's not clear if Spicer's gaffe at the podium will mean anything. In the past, Spicer has gotten away with fumbling a lot of policy points. But given that his entire job description is just to reiterate the administration's view on current events, Spicer is arguably not doing the best job.

There's no word yet about the status of Spicer's job in the long-term, but if Trump is savvy, something will likely change drastically, and soon, whatever that "something" may be.