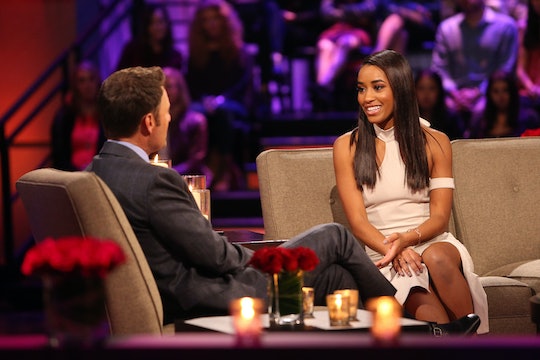 Seinne's 'Bachelor' Journey May Not Be Over Just Yet

A lot of predictions happen around this time on The Bachelor — and not just about who the winner will be. There's also The Bachelorette and Bachelor in Paradise to think about, too. So will Seinne be on Bachelor in Paradise? She went on the Women Tell All special this Sunday night to discuss her journey on Arie's season, especially the fact that it seemed cut short.

According to E! News, Seinne is a contender for the next Bachelorette. There are some hints that support that theory, like the fact that she seems over Arie on social media and she's hinted that this isn't the end. "Don’t worry guys, I’ve flown home alone from Italy once before," Seinne tweeted once her elimination aired. "And my flight had great food and unlimited wine and movies!" If last year's Bachelorette, Rachel Lindsay, had her way, Seinne would definitely be her successor. "I think Seinne is absolutely amazing," Rachel said at the Go Red For Women Red Dress Collection Fashion Show earlier this month in New York, as reported by Bustle. "So I'm rooting for her. If not to win, then to be the next Bachelorette."

Well, as Bachelor Nation knows, even if someone is the frontrunner that doesn't mean they'll end up being the lead. (Remember Caila Quinn? Luke Pell? Yeah — there's no guarantees on The Bachelor.) That doesn't mean that Seinne will never be on viewers' TV screens again, though, for there is Bachelor in Paradise to look forward to this summer. From what Seinne was saying on the Women Tell All, she is over Arie, and she is dating — but she's still single. So perhaps Paradise is the way to go.

Chris Harrison practically confirmed that Bekah would be going to Paradise (though she herself didn't confirm), but Seinne was a bit more coy. She admitted that she's moved on yet still looking for love, which is the classic narrative for people who come back to the franchise. In a video interview with E! Seinne said, "I would consider Paradise." She mentioned that she works full-time and thinks her job would more readily give her time off for something short like Paradise. "Maybe I'll meet someone before then, who knows."

So, Seinne is definitely keeping the door open but not committing to anything yet. That makes sense, considering Paradise won't start shooting for a few months. She may have her eye on the spot as Bachelorette, too, but who knows. I do know one thing: Seinne would probably be one of the biggest catches on Paradise, certainly more than the men. This brings up another point as to why Seinne might wait before saying yes to Mexico: because the majority of the men will be from the next season of The Bachelorette.

If Seinne's not into any of those men, what's even the point of going on a show? Seinne's smart for biding her time, and I'm glad she's over Arie in the meantime. For now, Bachelor Nation can see her on social media. There's a big possibility they'll see her on the franchise again, but nothing's decided yet. Hopefully Seinne decides to try her hand at reality TV love again and goes on Paradise.