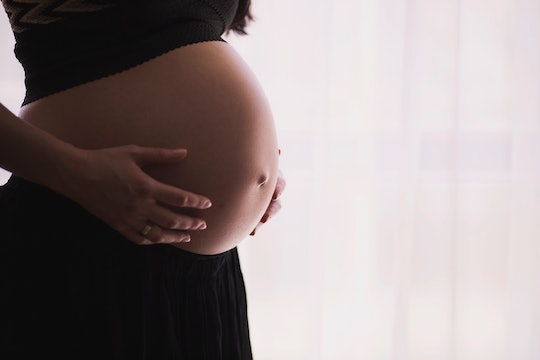 Will Sex Turn My Breech Baby? It's Something To Consider

Sex is often used to help pregnant mothers in a myriad of ways. Besides all of the usual benefits of having sex with a loving partner like happiness and intimacy, sex can also be used in more clinical ways. Doula Megan Brown says sexual intercourse is touted as a natural labor induction method. “We say what gets baby in, gets baby out,” Brown owner of Emerge Birth Services in Atlanta tells me during an interview. “It’s oxytocin, that love hormone. That’s what gets baby out." Oxytocin is produced by a woman when she’s bonding, cuddling or aroused. But can sex help women in other ways? Can sex turn a breech baby?

“Sex can be used for a lot of things during pregnancy, but turning a baby, I’ve never heard that," Brown says. "I’ve never told a mom to use sex to turn a baby.” But just because Brown has never heard of it, doesn’t mean it’s unheard of.

Samantha Wise, a mom in Newtownville, Ontario says she found out her baby was breech at 38 weeks. “He was a complete breech, curled in a ball in my back and ribs facing left,” she says. Wise’s provider made many natural suggestions to help flip her baby. The OB-GYN recommended walking for 20 to 25 minutes twice a day. However, because Wise was on modified bed rest, walking was difficult. The doctor also suggested that she crawl on her hands and knees and do cat stretches every five steps. She was even told chiropractic care might help. But because Wise suffers from complex regional pain syndrome (CRPS), a medical condition that affects her limbs, she couldn’t do the crawling or the chiropractic techniques.

When Wise explained her challenges to her doctor, he proposed she try sex with her husband. The doctor indicated that sex had worked for some women with breech babies. Because of the way her baby was positioned, her doctor suggested Wise lay on her left side and try to turn her torso to face upward, while gently pushing on her right side. “He also emphasized that orgasm was important, because it would cause contractions," Wise recalls. "That combined with gentle pushing on my side, should make him (the baby) uncomfortable in that position and get him in proper position.” Admittedly, she wasn’t 100 percent sure of it working, but her and her husband gave it a whirl. And it worked. “His next two appointments at 39 and 40 weeks, by all appearances, he was head down, however still more in my back and facing left," Wise says. "There wasn’t any concern with that, as they told me when actual contractions start, he would automatically turn properly."

She was induced at 41 weeks. Five hours into painful back labor, a nurse did a vaginal ultrasound. “She made an extremely weird face. As a first time mom, I kind of freaked out and asked what was wrong,” says Wise. What the nurse was seeing on the screen was Wises’ son’s testicles. He apparently had flipped back down into the breech position. Wise had an emergency C-section and gave birth to her son, at 5 pounds 12 ounces, with no complications from the breech. "They had no real definitive reasons for him flipping back, although they suspected his small size, a ton of scar tissues from kidney and bladder surgeries," she says. "As well as, scarring from Endometriosis. He simply preferred being up with his hands in the air."

According to Fit Pregnancy, Four percent of babies are breech at full term in the United States. And although there are ways of vaginally delivering breech babies, many providers opt to deliver via C-section to minimize the risk of injury to the baby. Many women may be alarmed by the prospect of having a C-section, and therefore try to do everything they can at home to flip their breech babies. Some of these natural methods seem really intuitive, like doing yoga poses and inversions with your body. According to the Spinning Babies website, tilting your pelvic floor can help and so can doing handstands in a pool (with water that’s deep enough to cover your belly). The thinking behind these methods is that if you flip your body into the position you want your baby, your baby will follow.

Although the Spinning Babies website does not currently list sex as a possible method for turning a breech baby, OB-GYN Dr. Mira Aubuchon of the Missouri Center for Reproductive Medicinem says it’s certainly possible. However, she cautions people putting too much stock in it. “If there are uterine contractions that occur during sexual activity, that may wake the baby up and cause it to move, if I had to speculate," Aubuchon says. "But clearly that’s just based on supposition.” She says also to consider how much force goes into doing an external cephalic version. “It takes a lot of pressure to make the child move, so I’m not sure just sexual activity alone would do it,” Aubuchon says.

Although sex may not be a proven method yet to flip a breech baby, it's certainly worth a try if your doctor OKs it. And if nothing else, you could do it just for the fun of it.