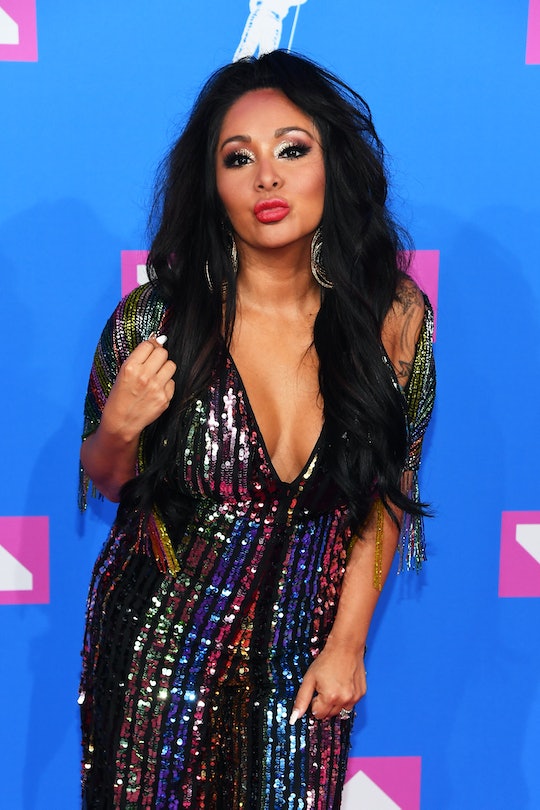 Why It Looks Like Snooki Won't Miss Out On 'Jersey Shore: Family Vacation' Season 3

The Jersey Shore family is about to get a little bigger. Nicole Polizzi, aka Snooki, is currently pregnant with her third child and her announcement has likely left fans wondering if Snooki will be on Jersey Shore: Family Vacation Season 3. Well, based on recent Instagram posts from co-star and fellow meatball Deena Cortese, it certainly seems that way.

Back in December, Deadline reported that MTV's Jersey Shore spinoff Jersey Shore: Family Vacation had been renewed for Season 3. And in recent weeks, the Jersey Shore cast has been posting some behind-the-scenes glimpses of filming and doing press for the upcoming season.

For instance, a Instagram photo posted by Cortese, who appeared in just some of Season 2 of the show because of her own pregnancy, shows her and Polizzi sitting side-by-side in a car. But it's the caption that suggests Snooki will be featured in Season 3. Along with a camera emoji, Cortese captioned the photo, "mama meatballs."

The subtle caption speaks volumes and has led fans to believe they'll be seeing to duo, aka the meatballs, together when Jersey Shore: Family Vacation returns to MTV for Season 3. While followers appeared excited by the prospect, sounding off in the comment section, neither Polizzi nor Cortese has responded to speculation about their appearances on the show.

"Oh I miss seeing you guys together," one Instagram user wrote, while another said, "Miss watching you ladies together."

This isn't the first time Polizzi and Cortese have maybe hinted at filming Jersey Shore: Family Vacation. Earlier this month, Cortese shared an Instagram photo of herself and Polizzi standing outside a house together.

"Two Meatballs and a Baby," Cortese joked in the caption. It's unclear whether the pair were together simply because they're friends, or because they were filming.

In March, Polizzi revealed to People that she didn't intend to take much time off from Jersey Shore: Family Vacation or her other work responsibilities, surrounding the birth of her third child. "That's not a thing," she told People when asked if she would take maternity leave. "I'm probably gonna take a couple of days off but my mental state is always thinking about work and my brand, and expanding it and improving it and making it better... So taking a day off ... that stresses me out, actually."

Polizzi first revealed she was pregnant with her third child in November 2018 on Thanksgiving Day, according to Entertainment Tonight. She made the announcement on social media, sharing an Instagram photo of her two kids, Giovanna and Lorenzo, holding an ultrasound photo. "What I'm thankful for this Thanksgiving," Snooki captioned the photo.

Snooki and husband Jionni Lavalle had been trying for another baby during Season 2 of the MTV reality show, according to Entertainment Tonight. And her pregnancy news came about a month before it was announced that Jersey Shore: Family Vacation was renewed for a third season, according to Deadline.

Following the announcement, Cinema Blend speculated that Snooki may sit out Season 3 of Jersey Shore: Family Vacation because of her pregnancy, but also noted that she's filmed pregnant in the past and may do it again. That, coupled with some telling Instagram posts has fans hopeful for at least a few meatball days in the upcoming episodes of Jersey Shore: Family Vacation. MTV hasn't released a trailer for the upcoming season just yet, so loyal fans will just have to wait and see.