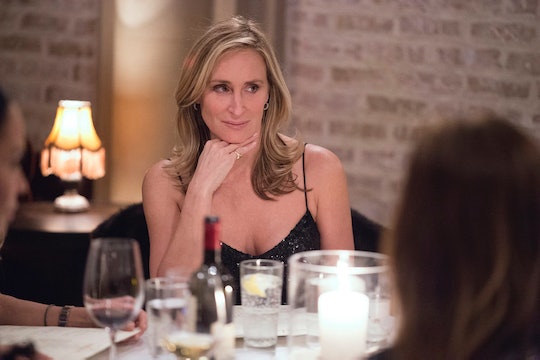 Will Sonja Morgan Rename Tipsy Girl On 'Real Housewives'? Here Are Some Ideas

Sonja Morgan of The Real Housewives of New York has recently unveiled her latest project, a line of sparkling prosecco called, Tipsy Girl, but she most likely won't get to keep the name cute as it is. At least, if she wants to repair her friendship with Bethenny. You see, Bethenny, and others, believe that Tipsy Girl sounds a little too close to Skinnygirl, which is Bethenny's brand. So what will Sonja change the name of her prosecco to?

Though she loves the name, Sonja has admitted she'll have to change it. On Khloe Kardashian's show, Kocktails with Khloe, Sonja said, "I have to do something about the name. My girlfriend Bethenny wasn't thrilled with that." That's putting it mildly. Bethenny has claimed that she wants nothing more to do with Sonja after this, and their feud is definitely not restricted to what airs on The Real Housewives of New York. Bethenny actually tried to trademark "Tipsygirl" after she found out, in order to block Sonja's product from going to market. Girlfriend does not play around. It looks like Sonja is going to play ball and try to smooth things over gracefully by changing the name. But to what? Here are my suggestions:

After the unveiling when she revealed the name, Sonja called herself "the ultimate tipsy girl," which is an interesting title but I like it. Assuming that we all liked "Tipsy Girl" because the word "tipsy" is a very cute way of saying "slightly drunk," maybe we can just add a different word to the end. Maybe Sonja is actually the ultimate tipsy lady.

It is Sonja's favorite phrase and I think it should be applied to everything. Plus, her "international lifestyle brand" has done better than any of her other ventures so far, and that should be celebrated and capitalized on.

It almost sounds like best friend Ramona Singer's liquor company, Ramona Pinot Grigio, but it's not. There's a "j" in it, so it's named after the portmanteau of BFFs Ramona and Sonja's name. There's no way Ramona would be upset about that, right?

Can't we just keep this simple? Sonja is fabulous enough without a cutesy name for her prosecco.