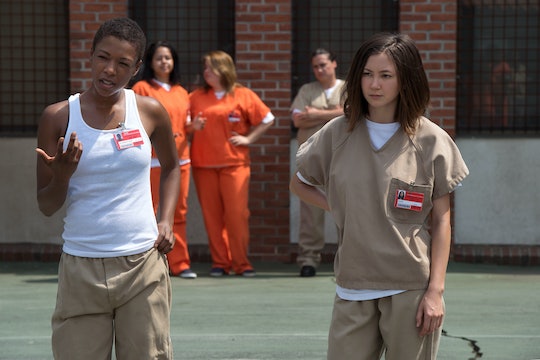 Will Soso & Poussey Get Together On 'Orange Is The New Black'? They Understand Each Other

On Orange Is the New Black, both Brook Soso and Poussey Washington have had a rough go of it during their time at Litchfield. Soso was something of a punchline when she first showed up, irritating everyone because she couldn't stop talking, though her story gained more depth as she dealt with depression and isolation. Everyone else in the prison had a group to belong to except for her. Poussey also struggled with depression and loneliness, as well as her dependence on alcohol. When Poussey and Soso started to bond in Season 3, it felt like a surprisingly good match. The two women could really understand each other. But will Soso and Poussey get together?

More Like This
Here's Everything We Know About 'Black Panther: Wakanda Forever'
Look At All These Ridiculously Cute Pics Of Princess Charlotte Growing Up
Prince Harry’s Famous Dad Friend Warned Him About Paparazzi In Their Neighborhood
Josh Duggar's Family Has Spoken Out As He Faces Child Pornography Charges

It seems very likely that they will. Poussey and Soso connected in a pretty intense way in the Season 3 finale; after Soso attempted suicide by overdosing, she was found and revived by Poussey, Taystee, and Suzanne. It looked like Soso finally had somewhere to fit in, with friends who might support her, and it was thanks to Poussey's encouragement. They ended the season holding hands while they floated side by side in a nearby lake. If that's not a hint of burgeoning love then I don't know what is.

Poussey is looking for a girlfriend, too. After her unrequited crush on bestie Taystee fizzled out, she's been longing for a connection with someone that goes beyond friendship. Soso feels the same way; she spent a lot of Season 3 unable to understand why no one really cared about her. The circumstances of Soso and Poussey's connection might have been unusual, but they're actually surprisingly right for each other at this point in time. They both understand just where the other one is coming from because they've been fighting the same battles. That's something both of them desperately need.

Actresses Kimiko Glenn and Samira Wiley are both on board with the relationship, which certainly doesn't hurt. Glenn told Vulture that she hopes the two characters start get together, adding, "I don't have any friends, so anything I can latch onto at this point, I'm like, 'Yeah.' Plus, Samira's hot, so I'm into it." When speaking to Bustle, Wiley expressed a desire for Poussey "to find some love" and also spoke specifically about that love being with Soso. She mentioned their shared troubles when she said, "It makes a lot of sense that people who are going through similar times in their lives will gravitate toward each other."

The trailer for the upcoming fourth season doesn't offer too many glimpses of Poussey and Soso together to fangirl over, there is one shot that's very telling. It's only a quick glimpse, but Soso has her arms around Poussey's neck and they're in serious kissing proximity. A romance between Soso and Poussey would be a bright spot in a season sure to be packed with conflict, and it would give both characters just the thing they've been wishing for.