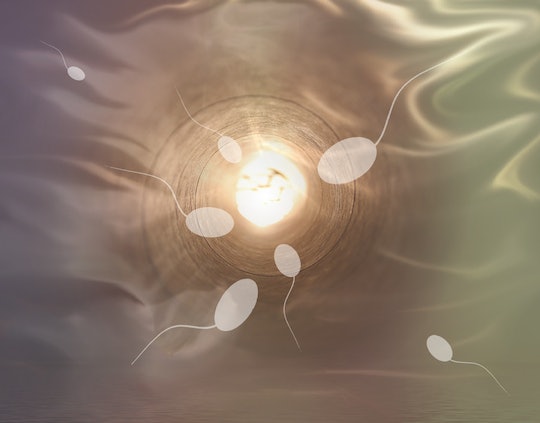 Will Sperm Hurt The Baby Early In Pregnancy?

Your partner is looking really good, and somehow, your morning sickness isn't unbearable. Sure, your boobs are a bit tender, and they're the size of dinner plates, but you still want some action. As you're getting ready to get down, you may worry — if sex with your partner involves sperm, will sperm hurt the baby early in pregnancy?

I remember when I was in eighth grade, my health teacher was pregnant. She was really progressive for a small town dominated by religion and Midwestern sensibilities and was honest and candid with all of her students without being creepy — she genuinely wanted us to know what was up and she did not mince words. In a town known for being the butt of jokes because the high school had one of the highest pregnancy rates in the country while being known as the Trojans, she didn't want that for us.

A part of that honesty was telling us that sex was wonderful, and felt great, but that we needed to be safe about it. All I could think was, she still has sex? It was baffling to me. I mean, how? What if she got like, double pregnant? Yes, I honestly worried that she could get pregnant with another baby, at the same time she was very pregnant with one already. Does it help to know I was a young eighth grader? Probably not. I also had no idea how much semen was released — I was thinking more in cups than tablespoons. Shudder.

When I became pregnant at 24, I remember laughing at what I'd thought at 12 or 13, but I still wondered about how sperm would affect my pregnancy, if at all. It's all hormones, right? Could my husband's baby batter bake something unwholesome?

It turns out that unless you're at risk for miscarriage, or are having sex with new or multiple partners, sperm may be a boon to you and your baby, according to the American Journal of Obstetrics and Gynecology. In fact, several studies on seminal fluid and preeclampsia have been published since 2001. The first was a Danish study which showed that exposure to your partner's semen, whether orally or vaginally, may lower your risk for preeclampsia (high blood pressure) during pregnancy. The second study, conducted by Harvard University in 2013, showed that women who are from similar genetic backgrounds as their partner should have lots of sex — oral and vaginal — prior to getting pregnant because of a mother's immune response and the effect that has on her cardiovascular system. The study found that you develop an immunity to your partner's testicular tonic, and reduce your risk of preeclampsia.

I know that early in my pregnancies, my husband was often the progenitor of my elevated blood pressure. I mean, he wasn't puking every day, which caused me no end of envy. Meanwhile, I was proofing his progeny and praying to the porcelain god. But, it turns out, that when I was feeling frisky, he was also protecting me from preeclampsia, not putting our baby in harm's way. So calm down, cuddle up, and get down with the copulation to have a possibly less complicated pregnancy.