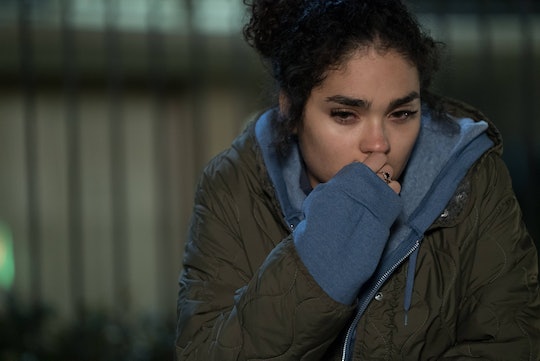 Will Star & Simone Get Arrested On 'Star'? They Committed A Crime

The first ten minutes of FOX's Star were a wild ride. The show put all of its plot lines into motion at lightning speed, creating a whiplash of introductions before dropping a major bomb and then pivoting away from it just as fast. Before the audience had even gotten a chance to get to know titular character Star and her estranged sister Simone, they were watching the girls commit a major crime right before booking it out of there, setting their eyes on stardom instead of dealing with the thing they'd done. But just because they would rather focus on the possibility of greener pastures doesn't mean their actions were totally forgotten. Will Star and Simone get arrested on Star? But first things first: what exactly did they do?

Star and Simone hadn't seen each other in five years, and their reunion was a doozy. After cajoling her sister's address out of a reticent social worker, Star turned up at Simone's foster home and decided to let herself in, arriving just in time to find Simone being sexually assaulted by her foster father, Otis Leecan. Star immediately ran to grab a knife from the kitchen and, without hesitating even a second, stabbed Otis multiple times. She then proceeded to take Simone from the house, leaving Otis for dead. As far as Star was concerned, that was the end of things. Game over, don't worry about it again.

But the girls probably aren't home free. At the end of the episode, Otis awoke in the hospital, his face unreadable as a cop asked him if he could think of any reason why someone would want to harm him. He didn't answer, even though he obviously knew what he did wrong, and the episode finished on an uneasy note. It seems certain that what happened is going to come back to haunt Star and Simone.

Though Star wanted to brush the entire ordeal under the rug, Simone was less able to just forget. She spent the pilot episode dealing with her trauma by self-medicating and childishly clinging to whoever she thought might make her feel the safest. Both Star and Simone thought Otis died as a result of his stab wounds, but the fact that he lived made it clear things weren't really over. However, that doesn't necessarily mean the girls will end up in jail for the crime.

Otis might not have any idea who attacked him. Star stabbed him in the back and he never saw her face, plus her estrangement from Simone meant that he'd likely never met Star before and potentially couldn't recognize her. Simone didn't actually do anything wrong except flee the scene; she didn't stab anyone, and she was also suffering longterm abuse. The stabbing could be argued as a case of self-defense: Star was acting to protect her sister, who was being raped.

Star's attempted murder of Otis is undoubtedly going to come into play in future episodes, but even if she is arrested that doesn't guarantee that she'll end up in prison for what she did. She'll just need a really good lawyer.