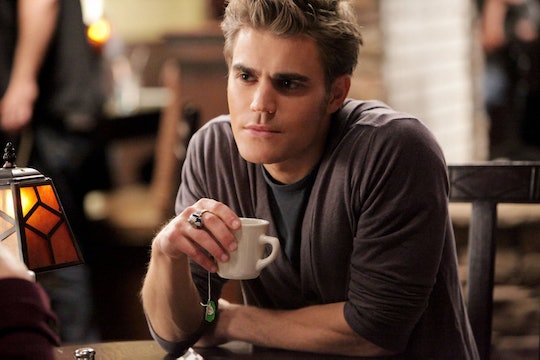 This 'TVD' Character Could Be Meeting His Maker

Vampire Diaries fans have become accustomed to saying goodbye to some of their favorite characters, but soon they'll be saying goodbye to the show as whole, with the series finale quickly approaching. However, what would the series finale be without at least one more death? Well, probably a pretty peaceful one, but that's not executive producer Julie Plec's style. Instead, someone's definitely dying by the show's end, it's only a question of who. Many have already placed their bets on one of the Salvatore brothers meeting their doom. So will Stefan die in The Vampire Diaries series finale or will someone else get the ax?

It was Stefan, or rather Paul Wesley who portrays the character, that confirmed the bad the news. He recently stated that "someone needed to die" in the finale, according to Digital Spy. "I don't want to react, because I feel like this is a test and you're going to deduce who it is," he said. "I'm going to do my poker face!"

While the cast is staying quiet about it, it does seem most likely that Stefan is kicking the bucket. He's human now, which makes him even more vulnerable and it would be a surprising twist. However, could it also be possible that the cast is pulling a trick on us and that somehow Stefan is able to die and become a vampire again, even though he was given the cure? With this show, anything's possible.

Besides Stefan, Elena and Matt are also likely suspects, though, it would be incredibly cruel for Plec to bring back Elena only to kill her off in the finale when she could've done that from the start when Nina Dobrev left the show. Matt, on the other hand, is definitely a more likely option.

As much as I love Matt, he doesn't really have any strong ties in the show. His mother and sister just came back from hell to cause trouble and his mother is really dead now. His father was dying in the latest episode and it's unclear if he pulled through. Matt's not dating anyone and, unfortunately for him, he's not exactly anyone's priority. If anyone was going to meet their doom in the finale I'd place my bets on Matty. He was cute, sweet, and I'll never forget him, but I also wouldn't cry over his death (well, not too much anyway).

Make sure to tune in for The Vampire Diaries series finale on Friday, March 10 at 8 p.m. ET on The CW to see which of your favorite characters survives all the way to the end.